Dyer, who has scored in each and every one of Albion's league encounter's with Blues over the two seasons in the Championship proved to be the nemesis of his former club when he fired home from Hope Akpan's pass as the game settled into the second period after a roller coaster of an opening 45 minutes.

The Brewers defending manfully, both before Dyer's strike and in the attempts to protect their lead with Birmingham frustrated and denied on several occasions as the frustrations grew for the home side as the game wore on.

After the encouraging performance, if not the win that Albion so desperately needed, against Middlesbrough on Monday it was a case of the manager putting his faith in the same players to do it again for the trip to St Andrew's. With pretty much a full squad to choose from the bench took on another strong look with Lucas Akins returning to the squad after several games out with a hamstring injury. Also returning to the substitutes roster was Harry Campbell as Joe Sbarra and Tomas Egert dropped out of the eighteen.

The game got off to a somewhat scrappy and disrupted start as Birmingham midfielder Maikel Kieftenbeld required early treatment for a knock to the head inside the first two minutes.

Confusion reigned on six minutes when Boga strode through after an advantage was played by referee Darren Bond following a foul on Jota from Kyle McFadzean. As Birmingham went off to celebrate assistant David Avent raised his flag to signify that Boga was offside and referee Bond pulled the game back for a free kick to Blues. The Chelsea loanee set his sights from further out this time but Bywater was equal to it with an athletic save.

As Birmingham continued to press in the search for an early breakthrough Bywater had to make another save, this time to deny Jutkiewicz, the big striker turning sharply when Jota's low shot was deflected into his path to fire low on goal, Bywater's leg providing the save on this occasion.

Albion suddenly had a chance to break and open the scoring for themselves on 13 minutes when Dyer was able to break from his own half but, tracked all the way by former Brewers winger Jacques Maghoma, the Brewers top scorer was unable to add to his tally as the ball was taken off his toe on the edge of the area allowing David Stockdale to comfortably claim.

Jota looked all set to open the scoring a minute later racing onto a through ball that cut the Albion defence again but Bywater, opting not to come out from his goal, provided the block at the near post once again.

As Albion started to get into an attacking flow, in and around the Birmingham area, Damien McCrory, who has endured an injury hit season, saw his game come to an end as he limped off midway through the first half to be replaced by Akins. The popular forward who has showed plenty of versatility this season slotted in at right back with John Brayford switching to the left.

Maghoma and Jota then combined down the left and it was all hands to the pump as Jutkiewicz, Boga and Jota were all denied, the latter by McFadzean on the line as the Brewers defence found themselves stretched once more by the Birmingham attack.

Even full back Wes Harding was getting in on the action superbly controlling a long ball to him on the right before winning a duel with Brayford, Jutkiewicz eventully steering his cross wide of the target.

A pinpoint ball into the box from Sordell picked out Bent on the half hour mark but having to take it awkwardly out of the air it allowed Michale Morrison to get back and do just enough to put the experienced striker off his shot.

Jota was a constant threat, particularly down the right and when he clashed with Brayford referee Bond played on as the Spaniard got free, his cross picking out Jutkiewicz at the back post and the big striker seeing his header saved comfortably by Bywater. It was a chance wasted as he had time to bring the ball down and pick his spot. The Albion skipper took a knock in challenging the Birmingham winger and some concern from the sidelines and treatment from Nick Fenton he was able to continue as half time approached.

Harlee Dean tried to put Birmingham in front on the stroke of half time getting up well to head towards goal from a Maghoma corner but under pressure his attempt dropped wide of the post.

Despite concerns before the break , Brayford reappeared for the second half showing no signs of his earlier knock.

As seems customary on these games it was DYER who grabbed the Brewers goal on 48 minutes. Sordell played Hope Akpan in down the middle and, resisting the chance to shoot himself, laid the ball through the legs of the defender into the path of the experienced winger who took a touck before drilling a deflected effort beyond Stockdale to give the Brewers the perfect start to the second half.

Naylor picked up a booking for a crunching challenge on Boga as Albion started to defend more resolutely in an attempt to defend their lead.

Sordell almost made it two when the chance for a left footed strike opened up on 55 minutes but he chose to bring it back onto his right foot allowing Stockdale to make a comfortable save to his right from the somewhat scuffed shot.

Akins had to show plenty of awareness and agility as Birmingham pushed again on 57 minutes, an outstretched leg takig the ball off the toe of Maghoma as he tried to sneak in behind the Burotn defence.

The yellow cards started to come with some regularity as the second half continued. Both Kieftenbeld and David Davis picked up cards before Bent's lunging challenge on Maghoma evened up the card count on the hour.

Birmingham were coming closer and Jota struck the base of the post with an effort from outside the box after finding space in a central position to try his luck.

Bent only lasted until the 64th minute when he seemed to pick up a knock and was replaced by Ben Turner as Albion reshuffled and went with a 5-4-1 formation, Boyce now deployed as the lone striker.

Birmingham continued to have no luck in front of goal as Bywater stood tall once more to deny Jutkiewicz as the striker scampered onto Jota's pass into the box for him. The angle was against the Blues striker but he would have hoped to get the ball past the Burton keeper.

Davis then had his head in his hands as his twenty five yard effort skimmed off the top of the crossbar from 25 yards out with twenty minutes remaining.

How Birmingham did not equalise on 75 minutes remains a mystery. Davis got the better of Akins on the edge of the box and drop the ball at Bywater who pushed the ball away from him but only into the path of Maghoma. The winger's effort suffered the same fate and Jutkiewicz somehow put the ball over the bar from close range. St Andrew's was stunned to see that their side had not found the net.

The pressure on the Burton defence was mounting the longer the game went on and with seven minutes remaining it was time for Luke Murphy to enter the fray in an attempt to add some fresh legs and energy into the midfield.

Birmingham sacrificed Maxime Colin from their defence to enable Cheikh Ndoye come on and add his considerable size and presence to the home attack for the remainder of the game. He certainly did that from the off colliding with Bywater as the keeper came to cllect a hanging Maghoma cross.

The equaliser eventually came for Blues on 87 minutes but it was the aerial presence of JUTKIEWICZ which proved Albion's undoing as the striker got up well to convert Boga's cross.

Neither side wanted a draw and even deep into stoppage time the game was stretched as Boyce tried to fashion a chance for Albion before Jota went on a weaving run before furing just over the crossbar from the edge of the box.

It is hard to deny that Blues warranted something from the game but for Albion to get so close, once again, to a vital three points made it feel like a defeat at the end. The Brewers are still alive and kicking in the Championship but the task is getting harder as each game ticks by.

TICKETS for tomorrow's trip to Birmingham City are now off-sale at the Pirelli Stadium, although tickets will be available to buy at St Andrew's on the day.

A cash-only turnstile will be open from 1:30 PM for Brewers fans to purchase tickets ahead of the crucial Championship clash.

Under 15s must be accompanied by an adult or they will be refused admission at the turnstiles. No tickets can be sold to under 15s without an adult ticket also being purchased. Proof of age may be asked for.

Wheelchair and ambulant tickets are sold at standard prices but come with a free companion ticket. 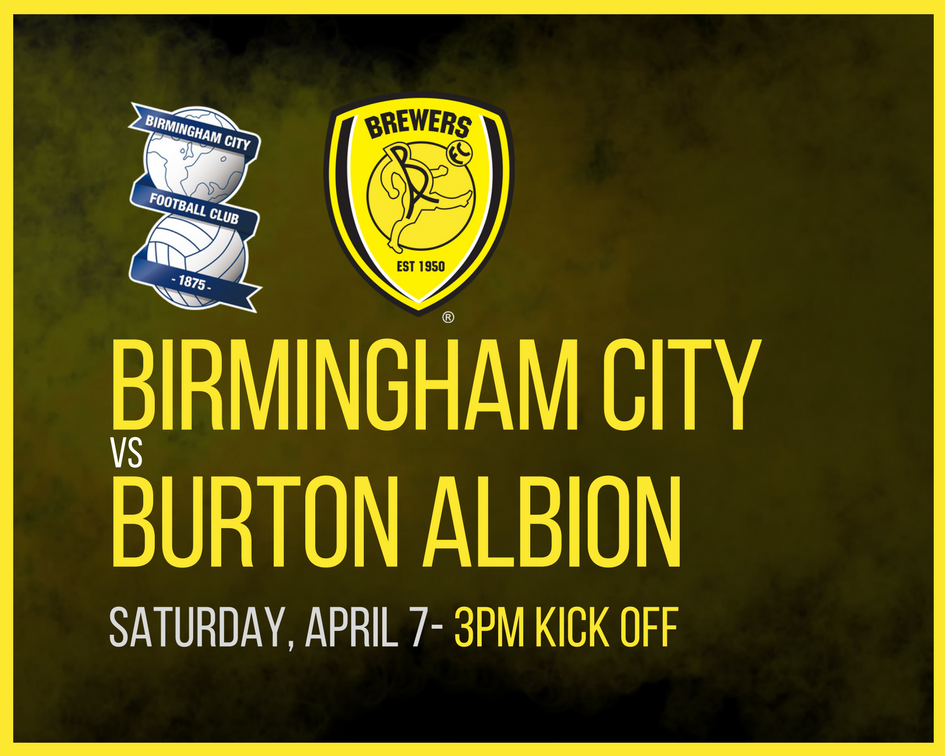 
TICKETS for Burton Albion's trip to Birmingham City are set to go on sale.