BURTON Albion host Bolton Wanderers this afternoon, with both sides knowing that a win would be crucial to their survival chances.

Only two competitive meetings have taken place between the two sides, with the Brewers winning each of them 1-0. The most recent match between the two came in December, when a goal from Lloyd Dyer secured all three points for Burton in the first every league game between the teams.

While Lloyd Dyer has a terrific record against Bolton, scoring four times and winning seven of his eight games against them, the Burton top-scorer will not be able to add to it. The ex-Leicester winger will miss the game through a hamstring injury, while Damien McCrory is also a doubt for the match

Filipe Morais (calf) and Antonee Robinson (shoulder) will be assessed prior to the game this afternoon. Morais has managed one goal and three assists in 31 league games this season.

Graham Scott has refereed two Championship games this season and has issued 11 yellow cards, one red card and awarded one penalty. The Oxfordshire referee has predominantly worked in the Premier League this season, where he has took charge of 18 games.

Supporters can park in the Pirelli Stadium car park for just £5, as well as Burton Albion's overflow car park at Ryknild Industrial Estate, left at the island for £5. the Pirelli Tyres staff car park is available this season (£3 per car).

Burton Albion encourages fans to walk to the ground or use public transport to get to the stadium if possible. Supporters who do come to the ground in vehicles are encouraged to car share.
All supporters are asked to park responsibly and to be aware of parking restrictions and the needs of residents when leaving their vehicles.

Activities include small sided games, penalty shoot outs, skill challenges and much more. It's completely FREE with a match ticket! Just turn up between 1.15PM and 2PM.

Burton Albion fans can still purchase tickets for the game.

The easiest way to buy tickets is online at www.burtonalbionfc.co.uk/tickets. Alternatively, Albion fans can purchase tickets over the phone (01283 565938) or in person by visiting the club shop during normal opening hours.

Away supporters are NOT able to purchase tickets on the day.

After a successful trial Burton Albion Football Club is making its Family Area a regular feature for the remainder of the 2017-18 Season.

Are you visiting for the first time today? Read our new fan guide here.

The fight for Championship survival goes to the final day of the season. First half goals from Hope Akpan and Lucas Akins proved enough to overcome a Bolton side also dragged deep into relegation trouble on a nervy day at the Pirelli.

Albion chose the perfect moment to make it three consecutive Champiosnhip wins in as row as the Brewers held their nerve to give themselves a chance oif securing safety.

Akpan smashed home a rising drive to open his account on 28 minutes before Akins prodded home a loose ball eight minutes later. Much as Bolton pressed they could not get back into it and Liam Boyce missed second half chances to put the game out of sight.

With Damien McCrory struggling to overcome a painful shoulder injury picked up at Sunderland last weekend there was an enforced change at the back with Ben Turner continuing to deputise after finishing the game on Wearside at left back. Albion's other change came wide on the right side of midfield where MArvin Sordell was restored to the side at the expense of Joe Sbarra. Sordell once commanded a £3m fee when joining the Trotters from Watford earlier in his career.

Bolton started brightly as they looked for the win that would all but confirm their survival. Sammy Ameobi found space early on down the Wanderers left to flash a cross low across goal but none of his team mates had made the anticipatory run into the box to finish it off.

Albion's first effort of the afternoon came on eight minutes with Hope Akpan, still searching for his first Brewers goal, stinging the palms of Ben Alnwick in the Bolton goal with a long range shot from outside the box.

Kyle McFadzean found himself in referee Graham Scott's book as early as the eleventh minute for a none too subtle handball that prevented Bolton from launching a breakaway deep in their own half.

Adam Le Fondre momentarily had a sight of goal as the ball pinged around the midfield but McFadzean was back in position to get in a timely block on the former Rotherham man's low strike.

Bolton looked dangerous on the break and when Karl Henry was able to deliver a cross in from the right it was a good job that Jacob Davenport was in the right place to get hids head on the ball before Darren Pratley could head home for the visitors. Le Fondre then found space to pick up an excellent cross field ball only to send a dipping volley comfortably over the crossbar.

Henry had a chance to break the deadlock himself on 25 minutes, outmuscling his man on the edge of the box to fire a volley that was uncomfortably close to goal from an Albion perspective.

Having been on the back foot somewhat and perhaps being guilty of surrendering too much possession to their opponents it was the Brewers that struck on 28 minutes. Boyce did superbly to hold the ball up inside the box before AKPAN took the ball on, drilling a rising shot beyond Alnwick into the far corner.

Lucas Akins almost added a second moments later with a header that had Alnwick stretching to make sure it went behind before a succession of corners were dealt with by the Bolton defence, albeit not altogether convincingly.

AKINS was the man on the spot as Albion made it 2-0 on 36 minutes. Bolton struggled to clear their defensive lines as Akpan had a couple of attempts to double his own tally but whilst the former Blackburn man couldnt find the net the ball broke kindly for Akins to poke the ball beyond Alnwick and watch it trickle into the back of the net.

Bolton tried their best to get back into the game as half time approached but it was Sordell who went close with a rising drive after more good work from Boyce as Albion threatened a third before referee Scott brought the first half to a close.

Bolton, sent out early for the second half by manager Phil Parkinson, made a double change in their bid to rescue something from the game. Jon Flanagan and Derik Osede were to take no further part in the game as Filipe Morais and Will Buckley came on to try and add an extra attacking dimension.

Both got stuck into their task with Buckley in particular looking dangerous on the left hand side, a curling shot on 57 minutes deflected wide. The aim was to pump as many balls into the Burton box as possible and there was danger just after the hour mark when Naylor was adjudged to have fouled Le Fondre just outside the box giving Morais the chance to whip in a free kick that just beat the outside of the post.

Albion were getting penned back but they broke free of the defensive shackles on 64 minutes to give Boyce the chance to force Alnwick into an excellent save from a tight angle.

Bywater looked to be struggling after stretching to tip away a dangerous cross from Noone before Albion had a glorious chance to put the game to bed. Sordell was played through by Murphy and Alnwick once more came to his side's rescue with a good save with Akins just unable to finish the loose ball. As Bolton pressed forwards they conceded another chance as Boyce led the break before laying the ball to Murphy who had his head in his hands as he scooped his effort over.

With the game getting increasingly stretched Boyce had another chance to finish it. Another run down the left hand channel gave him the opportunity to test Alnwick once again but the outstretched arm of the keeper came to Wanderers rescue and it was the Irishman who almost had the final saw flashing a header from the resulting corner just over the top.

Bolton continued to push for any sort of lifeline but everything they threw into the Burton box was met with a Brewers head or foot trying to clear and preserve the clean sheet.

SUPPORTERS collecting match tickets for Bolton will be asked to show photo ID. The game is now sold out with no tickets available to buy.

The best ID is a current driving licence but a passport AND a recent utility bill showing a home address can also be used.

The Pirelli Stadium is expected to be very busy in the run up to kick off (3pm). Fans are asked to leave plenty of time to collect tickets and gain access to the ground. The ticket office will close at 2.45pm.

Home fans are also reminded that they must not buy tickets on behalf of away supporters. No away supporters are permitted in the home sections of the ground under any circumstances.

The club will take action against any home supporters who buy tickets for away fans with the results passed on to the police for further enquiries which may result in prosecution. 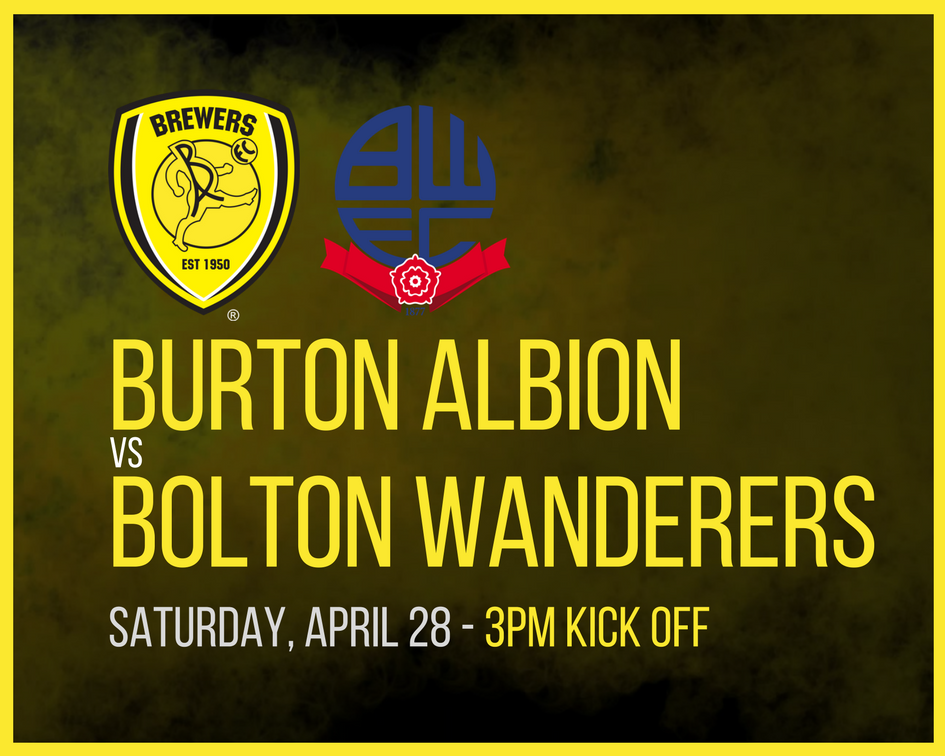 
TICKETS for Burton Albion's final home game of the season against Bolton Wanderers are set to go on sale.