Ten men Albion slipped to defeat at the KCom Stadium with Uruguayan striker Abel Hernandez grabbing a hat-trick to help send the Brewers crashing. Jackson Irvine gave Albion hope, cancelling out Hernandez's 7th minute opener with a fine equaliser just after the half hour but his dismissal for a second yellow shortly afterwards was a turning point.

After making eight changes for the Carabao Cup game at Oldham in midweek manager Nigel Clough made a further eight changes for the visit to take on the Tigers in the Sky Bet Championship. Tom Naylor, Hope Akpan and Lucas Akins were the only three to stay in the starting eleven as the formation showed another change from the last two games. Naylor started in a back three alongside Kyle McFadzean and Jake Buxton. Matty Lund slotted in at right wing back and Stephen Warnock, handed the captain's armband in the absence of John Mousinho, on the left. A solid looking midfield three was made up of Luke Murphy, Hope Akpan and Jackson Irvine with Akins partnered with Marvin Sordell in attack.

Albion had early concerns when Warnock went down unchallenged on the left clearly in some discomfort and after some initial treatment returned to the action. Before Albion could get their concentration back Hull were raiding down their left through Kamil Grosicki and with numbers up in support he opted to go it alone forcing an excellent save from Stephen Bywater. It was clear that Warnock was unable to continue and after further attention he limped off to be replaced by Lloyd Dyer.

The Tigers, even at this early stage, had the bit between their teeth and it took them just seven minutes to open their account. Youngster Jarrod Bowen, a scorer on the opening day last weekend, teed up Markus Henriksen for a rasping shot that cannoned back off the Albion crossbar. The ball came out to HERNANDEZ and his reactionary header had enough power to find the back of the net despite Bywater getting a hand to it. There were suspicions of offside but no flag was raised.

Akpan had shouts for a penalty when he seemed to be pulled over as he went to shoot but referee Darren England was having none of it. Almost immediately Hull were racing forwards again with Grosicki the outlet on the left, outpacing Naylor and causing more mayhem with a cross that was eventually cleared away, Sam Clucas having the final shot that blazed well over the bar.

Midway through the half Akins did have the ball in the back of the net but the eagle eyed assistant decided that when the ball came to him after Irvine had dispossessed Ola Aina he was offside. He didnt look it but it was more encouraging signs though for Albion.

At last able to exert some pressure on the Hull goal a half cleared corner was returned with interest into the middle by Lund and Naylor forced a save from Allan McGregor to keep the Tigers ahead. A year either side and it would have been all square.

Hull looked a threat every time they came forward and Hernandez missed a golden opportunity to double his and Hulls lead when an offside flag failed to go up and unmarked he slid a shot across the face of goal and wide of the far post.

Sordell went close with a shot on the turn that just missed the angle of post and crossbar and it was agonising for Albion when Dyer curled a sumptuous ball through the Hull six yard box with nobody able to get a decisive touch.

The pace of Grosicki almost undid Albion again as they reflected on that missed chance. A lung bursting run from half way, again with no offside flag raised, saw the winger get in behind and with Bywater beaten unbelievably only find the side netting as McFadzean came back to close him down.

33 minutes in and Albion had an equaliser. Dyer stayed on his feet when he appeared to be clipped inside the box. Lund picked up the pieces and did well to work an opportunity for IRVINE on the edge of the box to instinctively curl a beauty of a shot around McGregor into the top corner.

The Aussie's afternoon was not about to get any better. Having already been booked for a challenge on Bowen earlier in the half he stretched to make up for a poor touch and upended the same Hull man to earn himself a second yellow and the inevitable red that followed.

Naylor also saw yellow as the half edged towards its conclusion. A none too subtle handball 25 yards out did not escape the attention of referee England but Grosicki from the free kick was unable to mete out any further punishment, curling the resulting free kick comfortably over Bywater's crossbar.

Hull came out with real purpose after the break and had the ten men of Albion penned in. The pressure eventually told five minutes in as the home side regained the lead. The pace of Aina had Dyer struggling and although the on loan Chelsea man was forced to come back inside onto his left foot he managed to deliver a perfect cross for GROSICKI to steer a well placed header beyond the outstretched arm of Bywater.

Albion had no time to respond before Hull had added a third. A long ball forward had the Burton back line stretched and it fell kindly for HERNANDEZ to slam in a left foot shot that Bywater could only get a touch to as it flew past him.

Nigel Clough made a change before the game could restart. Sordell had bene struggling since the early moments of the second half and the returning Tom Flanagan was pushed into action, slotting in at left back in a back four allowing Lloyd Dyer to push into a more orthodox left wing role.

Grosicki was the real livewire in the Hull side and after skipping around the challenge of Naylor on the edge of the box the Pole tried to set up Hernandez but Bywater produced an excellent block to deny the Uruguayan. However the big striker was not to be denied his hat trick for much longer. Another counter attack starting down the Burton left eventually played the big striker through and this time he had time to steady himself and fire ruthlessly home.

Having bagged his treble the striker was then substituted to give Adama Diomande a run out. Albion also made a change with Hope Akpan taking his leave of the action to give young Joe Sbarra some more valuable first team minutes.

Albion began to look a little battle weary and Hull continued to fashion chances as their man advantage began to tell in the closing stages. Skipper Michael Dawson was denied by an excellent block from Flanagan inside the box and Henriksen sent a piledriver just wide of the target as Hull went in search of a fifth.

Hull also introduced their latest signing, Seb Larsson from Sunderland and he was close to grabbing a debut goal but once more Bywater stood tall to deny him and keep it at four. Bywater also did well to smother a low shot from Diomande late on as some loose passing allowed Hull to threaten once again, Campbell setting up his new strike partner for a good chance.

The final chance of the game fell to Henriksen with the last kick of the game but his first time effort was blazed over the bar after good work from Aina on the right.

TICKETS for Burton Albion's away trip to Hull City tomorrow afternoon are now OFF SALE.

Albion fans can buy tickets on the day. Tickets will be available two hours before kick-off from the away bar located in the north east corner of the KCOM stadium at the same price.

Prices are £18 in blocks N6 and N7 and £24 in block NE. Please note that this price applies to all spectators – there are no concessions.

All juniors aged 14 or under must be accompanied by an adult.

Ambulant disabled tickets are available in each block at the respective prices with a free personal assistant ticket for those receiving medium or higher disability allowance. 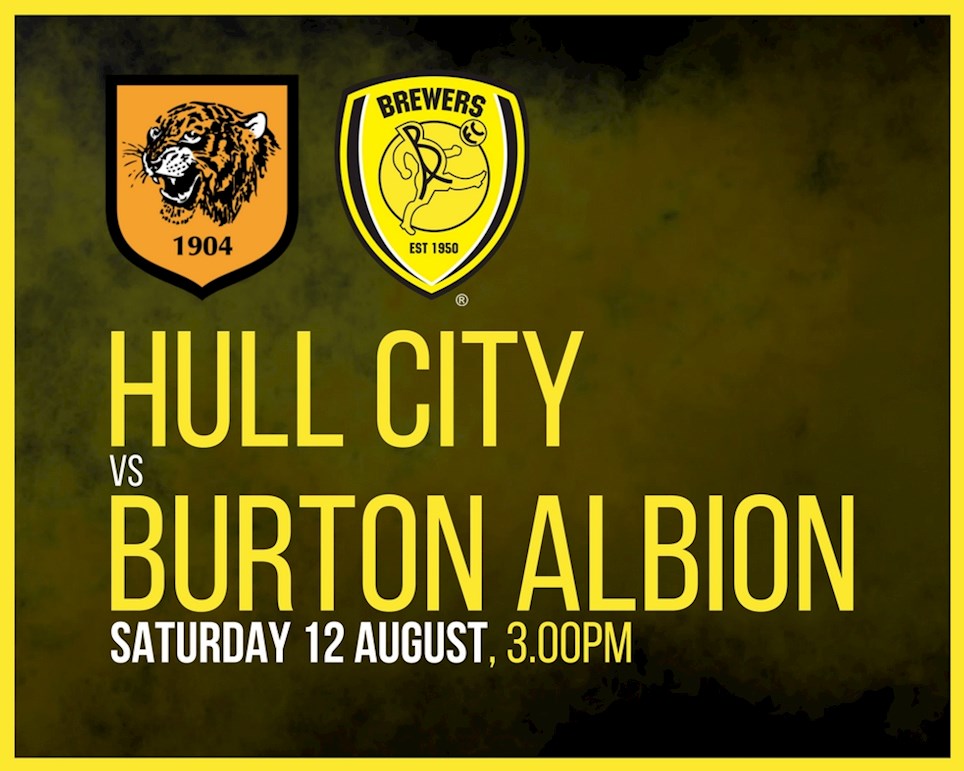 
TICKETS for the Brewers away trip to Hull are set to go on sale.