A goal in each half from £15m striker Britt Assombalonga sent ten-man Albion to defeat on their first ever visit to the Riverside Stadium. Clinical finishes by the former Nottingham Forest striker showed why Garry Monk paid such a big fee to boost Boro's push for immediate promotion back to the Premier League, For Albion it was a second consecutive game finishing with ten men, substitute Hope Akpan the man to see red on this occasion with just twelve minutes remaining.

Akpan was red carded inside the final quarter of an hour as he was punished for a strong foul on Boro substitute Lewis Baker but by then Assombalonga's double strike done the damage to condemn the Brewers to a third straight league defeat.

Injury and suspension forced Brewers boss Nigel Clough to make changes to his side in the wake of Saturday's 4-1 defeat at Hull. With Stephen Warnock unfit to play after coming off inside the first ten minutes at Hull, Damien McCrory slotted into a back four as Albion switched to a 4-5-1 formation at the Riverside. Lloyd Dyer, who came on for Warnock at the KCom Stadium retained his place, wide on the left of midfield and, rewarded for his excellent performance at Oldham in the Carabao Cup last week, Matty Palmer returned to the midfield as Jackson Irvine served his one match suspension and Hope Akpan dropped to the bench.

It was Palmer who fashioned the first effort on goal inside just two minutes. Picking the ball up just outside the box the young midfielder took the ball on his right and attempted to curl it beyond Darren Randolph in the Middlesbrough goal but his effort was well wide of the target.

More bright play from Albion in the early stages worked the first corner of the game aS Matty Lund was invited to get to the bye line and pull back a cross that was hastily cleared at the near post before Lucas Akins could pounce.

Boro's Adam Clayton was the first man to earn himself a place in referee Rim Robinson's notebook. A crunching challenge on Lund left the Burton man in some discomfort and after initially allowing the Brewers an advantage carded the Clayton as soon as play stopped at least a minute later.

The first real threat from the home side came on the quarter of an hour mark when Jonny Howson timed his run well to get in down the right and pull back a cross aimed for Rudy Gestede in the middle. Fortunately for Albion Jake Buxton had tracked the striker's run and stuck out a leg to intercept at the expense of a corner that Boro were unable to make anything of.

Albion had survived pretty much unscathed until midway through the half when Middlesbrough struck with ruthless efficiency. A mistake from Buxton just outside his own penalty surrendered possession to Gestede and he unselfishly fed ASSOMBALONGA for a low left foot finish beyond Bywater.

Lund quickly became the second name to go in the referee's book for a yellow card. A none too pretty sliding challenge on Assombalonga near the touchline persuading Mr Robinson to draw out his card again.

Boro almost doubled their advantage on 29 minutes. A direct run from deep by Assombalonga was finished with a back heel into the feet of Adam Forshaw, a first time cross from the midfielder finding Patrick Bamford with a diving header just wide of the post.

Palmer went close to an equaliser on 34 minutes. When Boro failed to clear their lines properly Albion's playmaker was lurking on the edge of the box for an angled drive that had Randolph at full stretch as it flew just pas his right hand upright.

Albion finished the half brightly but were unable to find an equaliser as the first period drew to a close. An encouraging forty-five minutes from Albion despite being a goal in arrears.

Boro got off to something of a sloppy start after the break and Akins was almost in on goal when a poor back pass from George Friend to his keeper fell short. The summer signing from West Ham just got there first but could only clear against Akins as he charged it down and the home side had got away with it.

Having been second best for the early minutes of the second half Boro sprang to life when Bamford's slide rule pass cut the Brewers defence open for Assombalonga to race through but he wastefully blasted wide.

On the hour mark it was Boro with a slice of luck to double their lead. ASSOMBALONGA worked room for a shot that was blocked but fell kindly for Gestede in space. His shot was well saved by Bywater but fell into the path of the former Forest striker to ruthlessly bury the rebound for his second of the game.

With the comfort of a two goal cushion Boro looked more assured and they thought they had added a third on 65 minutes when Bamford slotted home but home cheers were quickly cut short when the assistant ruled it out for offside.

Albion quickly made a double change with Luke Murphy and Lucas Akins, after another immense shift as the lone striker, withdrawn for the fresh legs of Hope Akpan and Luke Varney.

Boro had already brought on highly rated Chelsea midfielder Lewis Baker and he connected with a curling Cyrus Christie cross which was almost cheekily flicked in at the post by Assombalonga, the striker just unable to get his feet right to flick it in.

Baker had to be weel placed at the other end quickly after as Dyer managed to work room for a cross and with substitute Tom Flanagan, on for Sordell, lurking behind him the youngster did well to head away from danger.

Albion were suddenly faced with finishing the game with just ten men for the final twelve minutes as Akpan was given his marching orders. It was certainly a strong challenge from the summer signing as he went in on Baker but referee Robinson was well placed to see and there was no doubt in his mind that it was a dangerous challenge that warranted red.

With substitutes Adama Traore and Ashley Fletcher unleashed for the closing stages Boro had more pace to worry the Brewers defence and one outstanding pass from his own half by Traore looked to have Fletcher in on goal but Albion got back to make it difficult for him, Bywater eventually mopping up the danger.

TICKETS for Burton Albion’s trip to the Riverside Stadium this evening are now off sale from the Pirelli Stadium.

The Brewers take on Middlesbrough in the third league game of the Championship season in a 7.45PM kick off.

Albion fans can purchase tickets on the day at the Riverside Stadium from 6PM by visiting the visitor's ticket office. 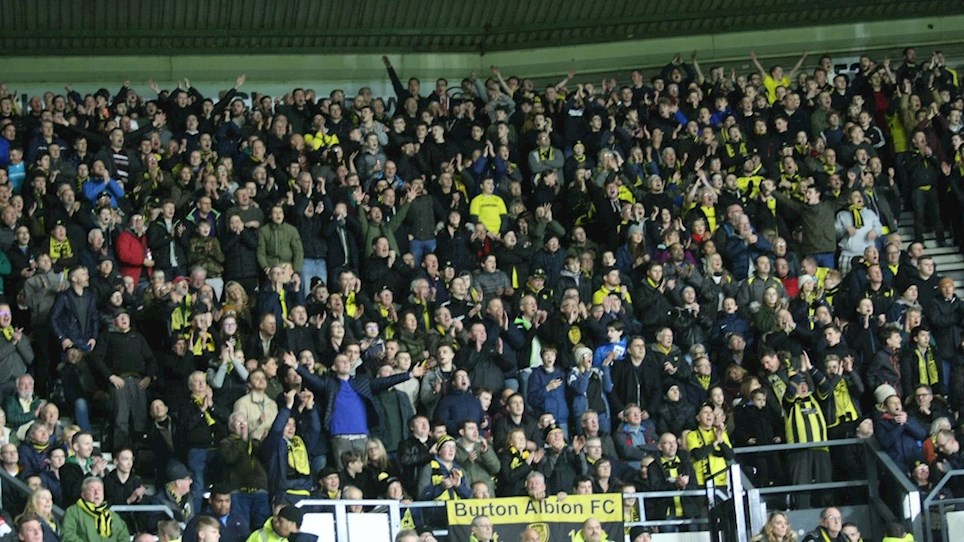 
TICKETS for Burton Albion’s trip to the Riverside Stadium on Tuesday 15 August are now on sale.