Sam Gallagher's second half strike sent Albion out of the FA Cup at the third round stage after a tight encounter at St Andrew's.

The on loan striker produced a rare moment of quality in a game between two of the struggling sides in the Sky Bet Championship when he swept home a cross from Jacques Maghoma early in the second half.

Albion, arguably, deserved a replay at the end of a game where they dominated the better openings in the first half without being able to find that elusive opening goal that would have given them something to hold on to.

Ben Turner came closest for the Brewers with his header just after half time cleared off the line but Gallagher's goal reinvigorated a sluggish City side who grew in confidence after the goal.

Nigel Clough bucked the trend in the FA Cup and named an unchanged starting line-up for the trip to St Andrew's to renew acquaintances with former Albion striker Steve Cotterill. After the stunning victory over Sheffield Wednesday on New Year's Day the Brewers boss was keen to continue the forward momentum of recent weeks, hence the decision to stick by the eleven who performed superbly at Hillsborough. There were, however, changes on the bench where Harry Campbell and club captain Shaun Barker were drafted in after Connor Ripley and Sean Scannell returned to their parent clubs. Ripley was recalled and re-loaned out to League One side Bury earlier in the week while Scannell picked up a groin injury in training this week and with expectations of a lay-off of five to six weeks had returned to Huddersfield Town.

After successive wins in the Championship in the week it was also an unchanged side named by Cotterill with the Birmingham City boss also having the same idea as Clough about trying to build new year momentum.

Both sides set out on the front foot with swift attacks threatening both defences in the opening exchanges. Neither Stephen Bywater nor David Stockdale were seriously tested although Birmingham's on-loan Southampton striker Sam Gallagher could not keep his effort on target on five minutes after a swift break by former Albion winger Jacques Maghoma had earned the Blues a corner.

Albion almost caught Birmingham with a fast break themselves on eleven minutes. It was all looking promising as Murphy and Akins set Albion going forwards but unfortunately Will Miller's pass through to Lloyd Dyer was delayed a moment too long with the winger flagged offside as he tried to burst through.

When Dyer did sprint away on the left shortly after only to be blocked on the edge of the area, Miller's resulting free kick was palmed away from the top corner by Stockdale.

Growing in confidence Albion almost opened the scoring in spectacular fashion on sixteen minutes. Akins and Naylor did the spadework this time before the ball was laid into the path of Tom Flanagan. With two goals in his last three away games, the defender fancied himself again and curled a first time effort wide of the post from 22 yards out.

A teasing cross from Dyer was just out of reach of Akins as Stockdale leapt to intervene before Birmingham managed to find the run of Jeremie Boga on the left. Forced inside the Chelsea loanee was crowded out on the edge of the box with Albion clearing to good effect despite half hearted shouts for a free kick right on the edge of the penalty area.

Pushing forwards again Naylor and Akins did well to free Dyer into the penalty area and his searching cross was just cleared off the toe of Miller looking to steal in and grab his first goal of the season.

The first yellow card of the afternoon came out on 36 minutes and it was shown to Birmingham midfielder Maikel Kieftenbeld. The man who almost moved to Derby on transfer deadline day was late on Tom Flanagan inside the centre circle leaving the Burton man in a heap. A poor tackle in all honesty.

Miller was again close to the opening goal on 39 minutes spinning well inside the box to pick up the ball from Flanagan's blocked shot only to see his effort blocked at close range as Birmingham defended resolutely.

Albion were growing in confidence and when Dyer lifted a hanging cross beyond the back post on 42 minutes John Brayford was steaming in only to find the side netting as the Birmingham defence tried to let the ball go.

Albion had definitely had the better chances in the opening half and would have been the happier side going into the break.

The Brewers came out for the second half with a change made on the right hand side of midfield. Miller who had been struggling with a knock towards the end of the first period was replaced by Joe Sbarra and the move almost paid immediate dividends. Akins won a corner in the opening second and the Albion substitute sent in a centre that came to Turner to head goalwards only for Craig Gardner to head off the line.

Birmingham suddenly found some attacking inspiration in the shape of Gallagher drifting out wide and when he sent an angled ball into the box it was Bywater who got there a split second before David Davis, bursting through from midfield, the ball scrambled behind for a corner.

The Blues took heart and on 56 minutes they were ahead. Maghoma managed to trick his way to the bye line before pulling it back into the middle for GALLAGHER to smash home from around 12 yards.

Birmingham had now found an added zest to their game and stepped up the intensity in an effort to put the game to bed. Maghoma almost did that as he burst through on the edge of the box but then lost his composure when it came to the finish, blazing over the bar.

Albion responded with Dyer once again the main threat down Albion's left sending over a cross that evaded Stockdale and needed Jonathan Grounds to awkwardly head wide of his own post to prevent the Brewers from equalising.

Brayford went into the book on 65 minutes for a foul on Boga as he tried to burst down the left. With two unmarked team mates over to his right it was vital that Boga was not allowed to get a cross away and Brayford's foul ensured that but earned him a yellow card in the process.

With Albion needing to push forwards in search of an equaliser they almost allowed Birmingham in for a second, only a tight offside call preventing Davis having a clean run through as Boga started to have more of an influence in the midfield battle.

Just inside the last twenty minutes Albion played their second substitute card and went to a flat back four with the introduction of Marvin Sordell. He replaced John Brayford and went straight into attack alongside Akins with Kyle McFadzean shuffling over to cover the right back slot.

Both Turner and Sordell picked up yellow cards as the second half ticked away and the Brewers began to look a little leggy in search of the goal that their play had warranted.

Murphy was rested for the closing minutes with Hope Akpan sent on as fresh legs in midfield and Birmingham did likewise with Maghoma brought off in place of midfield enforcer Cheikh NDoye.

Albion pumped plenty of balls into the Birmingham box late on but Stockdale was afforded good protection to ensure that it was the Blues that would take their place in the fourth round draw instead of Albion.

TICKETS for Burton Albion's Emirates FA Cup tie away at Birmingham City go off sale at the Pirelli Stadium at 4pm today but can be bought at St Andrew’s on the day.

The Brewers will take on their Championship rivals on Saturday 6 January, kick off 3pm.

Brewers fans will have to take their Burton Albion season ticket to gain entry at the reduced price for adult season ticket holders.

All under 15s must be accompanied by an adult, otherwise they will be refused entry at the turnstile. Students must provide a valid NUS identification to gain entry. 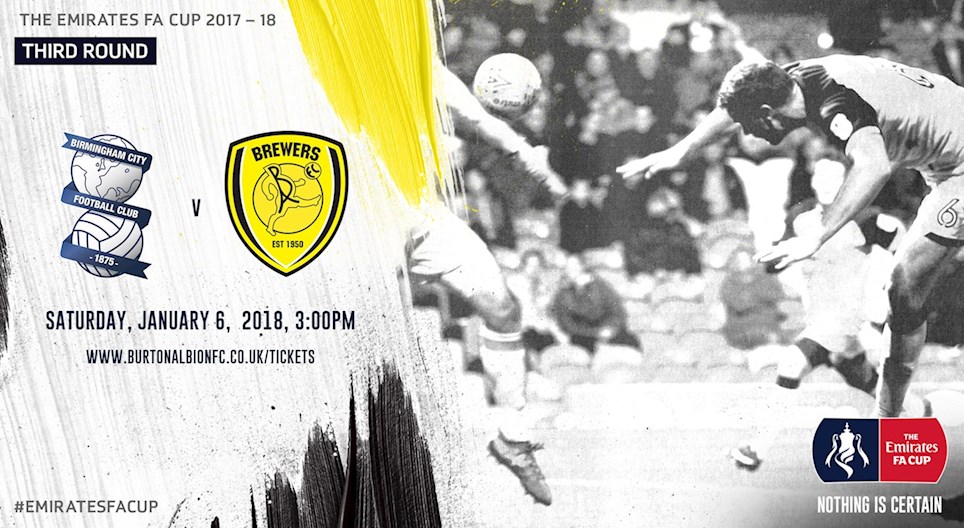 
TICKETS for Burton Albion's Emirates FA Cup tie away at Birmingham City are now on sale.