Albion's run of good form away from the Pirelli Stadium was brought to a crushing halt as Fulham avenged their defeat in Burton back in September with a comprehensive 6-0 win over Nigel Clough's men.

The Cottagers who have made their home ground more of a fortress since their last home defeat back in October are one of those sides who when they hit form can be almost unplayable and some of their slick passing and interplay proved too much for the Brewers who have to face up to their heaviest Championship defeat on the long trip back from the Capital.

A brace of first half goals from Rui Fonte sandwiched a smart finish from Lucas Piazon and in the second half it was the turn of Ryan Sessegnon to score twice before substitute Aboubakar Kamara finished things off late on with a well taken lobbed finish.

The only bright spark for Albion was debutant Martin Samuelsen who showed enough to suggest that in other circumstances he will be a more than useful addition to the Burton ranks for the remainder of the season.

Nigel Clough was forced into two changes for the trip to the in-form Cottagers, both due to injury. With Will Miller picking up a season ending knee injury last time out against QPR the timely signing of West Ham youngster Samuelsen cushioned the blow of losing the improving former Spurs youngster. 20-year-old Samuelsen, a full Norwegian international slotted straight in on the right hand side of midfield for a full Brewers debut having only joined up with the club on Wednesday. Ben Turner wasa the other absentee having picked up a calf injury in training on Friday. His absence meant that John Brayford dropped into the trio of central defenders with Lucas Akins asked to slot in as the right sided wing back. That enabled Marvin Sordell to return as the lone striker. The substitutes bench also saw the return of Luke Varney, Matty Palmer and Matty Lund to the squad.

In tricky conditions after plenty of pre match rain it was Fulham who tried to get their slick passing game going early on with Fonte denied by an early offside flag. Albion also allowed a couple of crosses in from wide that they had to defend stoutly early on as the home side looked tro continue their five game unbeaten run. Burton's cause was not helped by an early booking for Luke Murphy, the midfielder sliding in on his Fulham counterpart, Oliver Norwood, on the wet surface to earn the ire of referee James Linington.

After threatening several times without finding the final ball needed to break through it was the Cottagers who picked their way through the Burton rearguard on 17 minutes. A loose ball forward from Murphy was intercepted by Norwood and immediately slid through for the run of Piazon. The on-loan Chelsea man darted into the box before squaring the ball for Fonte who had tracked his run and the former Arsenal youngster had the simple task of steering the ball into the empty net.

It was almost two for Fulham on 22 minutes. The home side countered at pace from a free kick delivered in by Samuelsen and before they knew it the ball was quickly switched upfield and to the left for Sessegnon to run unchallenged into the box. Fortunately for Albion Stephen Bywater stood tall and beat away a fizzing shot that was rising and heading towards the top corner of the Albion net.

Piazon was close to a goal for himself on 27 minutes as Fulham patiently worked the ball around the edge of the Burton box. When the final delivery came across to the Brazilian he could not quite sort his feet out quickly enough to get a shot away and Tom Flanagan was able to clear his lines and relieve the pressure for a brief moment.

Right back Ryan Fredericks twice spurned good opportunities to extend the Fulham lead ghosting into space inside the box ands drilling rising drives over the top from good positions but his role was to be more of a provider than a scorer as the first half wore on.

Albion's first real shot in anger came on 32 minutes when Tom Naylor closed down well in midfield and got the ball forward to Sordell on the edge of the area. The Albion striker managed to wriggle and work room for a shot but his effort slid just wide of Marcus Bettinelli's right hand post.

Two minutes later and Albion found themselves further behind as Fulham struck with devastating effect. Fredericks was again the outlet down the right to run at the Burton defence. The full back knew exactly where he wanted to deliver the ball and after a dummy from Norwood it was Piazon who sweetly curled home with a first time shot from fifteen yards that left Bywater, even at full stretch, unable to get anywhere near it.

Two quickly became three and again it was Fredericks providing the ammunition. The former Spurs academy product was again afforded all the time in the world to look up and decide where to put it, this time FONTE his target and the Portuguese striker got the better of John Brayford in the air allowing him to slam home the loose ball as it dropped kindly for him inside the six yard box. It was the culmination of a disastrous spell for the Albion defence who were being left reeling by the movement and fluidity of the Fulham forward line.

The half time whistle, when it came, was a blessing for Albion who at least had the chance to regroup after being ran ragged for long spells of the first forty five minutes.

Fortunately for Albion the second half began at a slightly more sedate pace than the first half ended and there was something of a chance to regroup a little with Fulham seemingly a little more content to play with more patience and look for the right opportunities to break forward and punish Clough's men.

Albion at last began to enjoy spells of possession, something they lacked in the first half and they were at least able to string some passes together. When Naylor found space to lift a ball over the Fulham defence Dyer was able to run through forcing Bettinelli to rush off his line and head clear outside his area. The clearest chance yet for the Brewers to get themselves on the scoresheet fell to Flanagan on the hour mark. Samuelsen delivered a teasing centre that was flicked on by Dyer in the centre, the ball landing nicely in the path of Albion's left wing back who could not keep his shot down from around twelve yards out.

Both sides quickly made a change in midfield, Albion taking off Murphy and replacing him with Jamie Allen whilst the hosts were able to call on highly rated Tom Cairney, subject of interest from the Premier League, to replace Norwood.

With a little over twenty minutes remaining a second change for Albion was forthcoming. Brayford was the man to make way and Hope Akpan was sent on to add more fresh legs in midfield. As a result Naylor dropped into the back line to enable Albion to retain their shape.

Fulham finally found a fourth goal on 73 minutes and it was almost an apologetic goal from SESSEGNON. Fredericks it was who once again provided the initial thrust for the goal with a sprint with the ball down the right and when Stefan Johansen's shot was blocked by a combination of Buxton and Naylor the talented teenager reacted quickest to sweep home the loose ball from close range.

Samuelsen picked up a yellow card in fouling Fulham skipper Kevin McDonald as frustration began to creep in for the Brewers and after the newcomer had been replaced by Joe Sbarra Fulham strode forward and scored again. It was almost a repeat of the previous goal as the ball pinballed around the Burton box coming out to Johansen who again saw his shot blocked and the ball once more falling perfectly for Sessegnon to fire home.

Fulham had rediscovered their thirst for goals and only a superb reacytion stop from Bywater prevented substitute Aboubakar Kamara firing home on 82 minutes after slipping through the Burton rearguard on the edge of the area.

The rout was complete on 88 minutes as Fulham raided at pace again and it was the substitutes, Cairney and Kamara who combined, Cairney sending the lastter away to outpace Naylor and calmly lob over Bywater from the edge of the box.

TICKETS for Burton Albion's away trip to Fulham tomorrow are now only available at Craven Cottage.

Supporters can pay on the day with cash from the away turnstiles.

Disabled ticket buyers get a 50 per cent discount on above ticket prices; carers are free of charge.

Supporters buying concession tickets may be challenged and requested for proof of age. 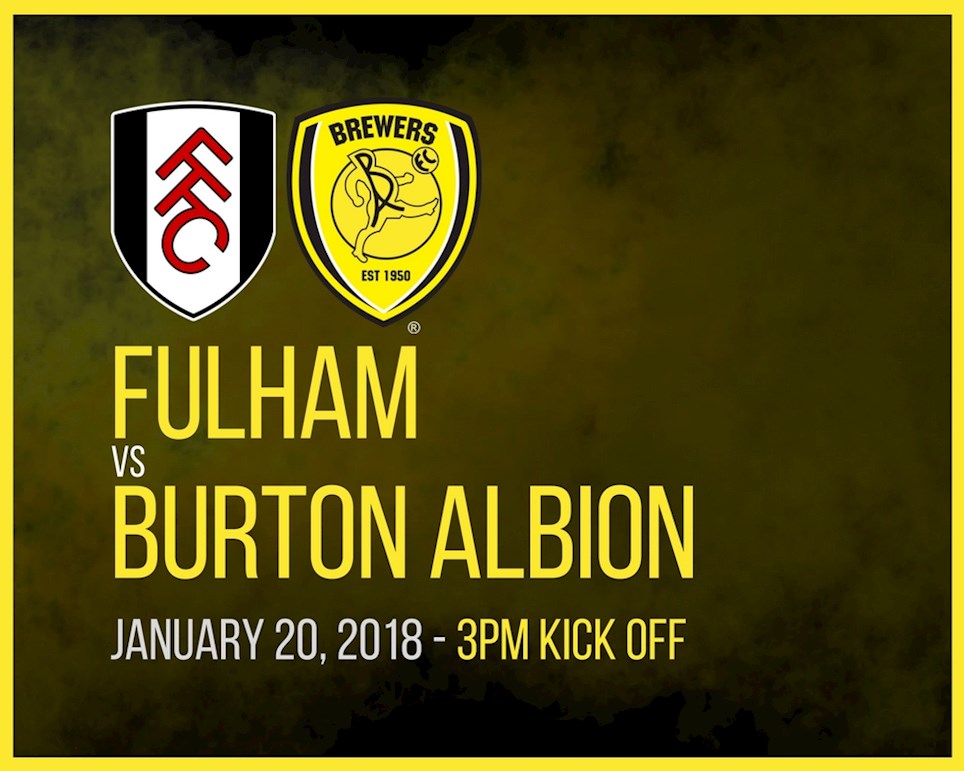 
TICKETS for Burton Albion’s away trip to Fulham on Saturday, January 20 (kick off 3pm) are now on sale to Season Ticket Holders and Priority Members.