THE Brewers are back on the road for the second time in a matter of days as Nigel Clough takes his team to Carrow Road to face Norwich City tomorrow night.

HEAD TO HEAD
Burton and Norwich shared the spoils last season, picking up a victory each. Home territory proved to be important when these sides met during the 2016/17 campaign as Norwich beat the Brewers 3-1 in September at Carrow Road, although the Canaries were turned over at the Pirelli Stadium in the reverse fixture.

SEASON SO FAR
Daniel Farke might not have had the start he was hoping for at Norwich after joining the Championship side back in May from Borussia Dortmund II.

Norwich currently sit 17th in the table, having won two of their six games in the division so far. Their first win came on 16 August when they beat Queens Park Rangers 2-0. They were heavily beaten in their next two games having lost 4-2 to Aston Villa followed by a 4-0 beating at Millwall.

The Canaries bounced back after the international break to beat Harry Redknapp's new-look Birmingham City 1-0 at Carrow Road.

NORWICH TEAM NEWS
Ex-German youth international Tom Trybull impressed on his debut against Birmingham in Saturday's 1-0 win and is likely to start again. Harrison Reed could come back into the team alongside Trybull in defensive midfield, replacing Norwegian midfielder Alex Tettey. Alex Pritchard and Louis Thompson are both ruled out for this clash with long term injuries.

BURTON TEAM NEWS
Nigel Clough may experiment with his team after a rough afternoon at Elland Road, where the Brewers shipped five goals to a rampant Leeds United side. Luke Murphy is available again after missing the tie with parent club Leeds due to registration rules prohibiting him from playing against the Whites. Marvin Sordell may come back into the fold, with Joe Mason moving to a more advanced role.

BEN TURNER'S THOUGHTS
Turner expects the Canaries to be tough test but says that the Brewers will only be thinking of winning the game, however, the defender will not be getting carried away if Burton do take all three points from Norwich.

He said: "It doesn't matter who we have got next, we will look to bounce back. Norwich will ask different questions of us than Leeds did, because all teams are different and every game is different, but we will be looking to get a result like we do in every game."

REFEREE
Andy Davies will be the man in charge of the game tomorrow night. The Hampshire based referee has officiated five games so far this season, four of those in the Championship. Mr Davies took charge of just one Albion match last season, when the Brewers drew 0-0 with Wigan Athletic in October.

TICKET NEWS
Brewers supporters will be able to purchase tickets from the Norwich Ticket Office at Carrow Road. Please be aware that it will be CASH ONLY.

A gritty and dogged performance from the Brewers secured a valuable away point from a goalless draw at Carrow Road. Albion probably had the clearer first half chances but in the second half Norwich threatened much more but could not find a way through the determined Albion defence.

After the bitter disappointment of the weekend it important for the Brewers to show a reaction and they certainly did that as they frustrated a side who as the game wore on ran out of ideas of how to break through.

Brewers boss Nigel Clough was forced into a couple of changes for the tricky trip to Carrow Road. Both Matty Lund and Shaun Scannell missed out with both suffering from tight calves and not risked with the hectic fixture schedule ahead for Albion. Luke Murphy, whose midfield presence was missed on Saturday against his parent club, made a welcome return to the side taking over from Lund. Marvin Sordell also returned to the side in the absence of Scannell but deployed as partner to Joe Mason in attack, Lucas Akins dropping a little deeper into the midfield trio as Albion changed formation back to 3-5-2 against the Canaries. This also meant that Kyle McFadzean dropped into the back three allowing John Brayford and Stephen Warnock to operate as wingbacks. On the bench there was a return to the squad for Hope Akpan after suspension and injury whilst young midfielder Joe Sbarra also stepped up to the bench with Matty Palmer joining the casualty list with a bruised foot.

After the fast and furious start at Elland Road on Saturday, this was more tame and tepid as Norwich spent large spells of the opening minutes passing the ball amongst their defensive players and goalkeeper without mounting any serious threat to the Burton goal.

In fact it was Albion who had the best opportunity of the first ten minutes. A delightful ball over the top from Murphy picked out the run of Mason and having drawn goalkeeper Angus Gunn off his line the Wolves loanee could not quite get enough on it to steer the ball into the gaping goal.

Norwich eventually began to lift the tempo with the pace of Josh Murphy a noticeable threat down the home side's left hand side but Albion stuck to their task of closing down and forcing the Canaries to look for chances from distance. Murphy did just that on 20 minutes cutting inside from the left but his right foot curler whilst initially looking dangerous never seriously threatened Stephen Bywater's goal.

Bywater showed safe hands twice in quick succession to cut out danger from the home side as both Nelson Oliveira and Murphy found space to deliver into the danger area but Albion's experienced stopper was in the right place to snuff out any serious threat.

Albion were starting to look more and more assured, stringing some excellent passages of passing together and they fashioned another decent chance for themselves on 29 minutes as Sordell got a glimpse of goal and tried to bend a right footer inside the bottom corner with the outside of his boot. He wasnt far away either with the ball beating Gunn but just curling wide of the post.

Norwich built up another head of steam as half time approached but from a similar position as Murphy earlier, Oliveira could not keep his curling shot down either much to the growing frustrations of the Carrow Road faithful. The Portuguese striker had a better chance moments later when Wes Hoolahan's low cross picked him out but on the turn his left foot effort was scooped over the bar.

The half time whistle was what Albion needed at this stage as Norwich threatened late in the half and sure enough with the ball deep upfield in Norwich's half referee Andy Davies whistle ensured that the Brewers had got through the first 45 minutes unscathed.

Albion almost had the lead within 60 seconds of the restart. Excellent closing down from Brayford on the right released Mason and the two combined again for the wing back to drive a low ball across the area that seemed to take Allen at the back post a little by surprise with Ivo Pinto stationed in the right place to eventually clear the ball away from goal.

Referee Davies reached for his yellow card for the first time on 54 minutes when Murphy caught Mario Vrancic late as Norwich looked to build a promising attack.

Bywater was forced into a meaningful save on 56 minutes when Warnock overstretched and lost possession with Hoolahan seeing a rising drive tipped just over the bar. Probably the closest the home side had. The Albion stopper produced an even more important stop moments later when Hoolahan threaded an excellent ball through for Murphy to go one on one inside the box. Bywater won the battle though, an outstretched leg doing enough to divert the ball away.

Vrancic earned himself a yellow card as he, none too subtly sent Mason crashing to the ground as Albion looked to break out. Albion turned to ex-Ipswich striker Luke Varney on 64 minutes as Mason was replaced in attack.

Norwich it was, though, who continued to press as the home side began to enjoy a spell of sustained play in and around the Burton penalty area. Oliveira went close with a shot from the edge of the area that rippled the side netting on 73 minutes as the home side continued to enjoy the better of the second half. Marco Stiepermann tried a more direct approach two minutes later with a rasping drive from 30 yards thalf flew comfortably wide.

Sordell was sacrificed with a quarter of an hour remaining, Lloyd Dyer sent on as a central attacker.

Murphy, for Norwich, still had plenty of pace to burn and after a searing run and cross through the penalty area then found himself on the end of a curling cross that smacked against the woodwork before bouncing out.

Norwich made a change as pacy former Wigan man Yanic Wildschut was introduced for Stiepermann in an attempt to unlock the stubborn Burton rearguard. Albion responded quickly by bringing on Tom Flanagan for Warnock to try and deal with the new threat and it was the substitute who was quickly forced into a vital clearance on the edge of his own six yard box as Norwich continued to push and probe.

The Canaries reserved their final two changes for the last seven minutes of the game. Cameron Jerome and James Maddison were the men that Daniel Farke turned to Oliveira and Hoolahan the men to take no further part.

Wildschut made his first real contribution straight after with a forceful run into the middle, a deflection off a Burton defender ensuring that his shot finished outside the post at the finish. Maddison too was soon in the action but his effort from inside the box was scuffed and no threat to the Albion goal.

Late yellow cards for Jerome and Klose from the home side and skipper Jake Buxton for the Brewers continued a scrappy end to the game as referee Davies began to lose patience.

When Murphy blazed high, wide and not very handsome at all deep into stoppage time it was the cue for referee Davies to bring proceedings to a halt. Albion had their first clean sheet of the season and a much valued first point on their travels for the season.

ALBION supporters will be able to purchase tickets on the night at Carrow Road.

The Brewers take on Norwich City tomorrow night, and Albion fans will be able to purchase tickets from the Norwich Ticket Office. Please be aware that it will be CASH ONLY. 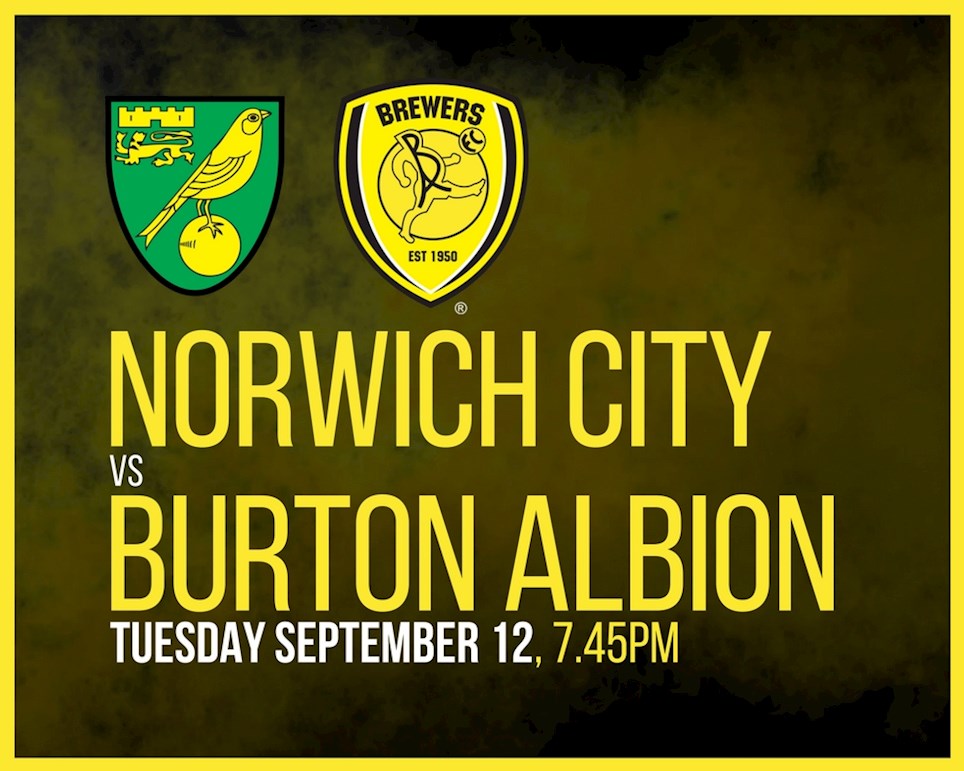