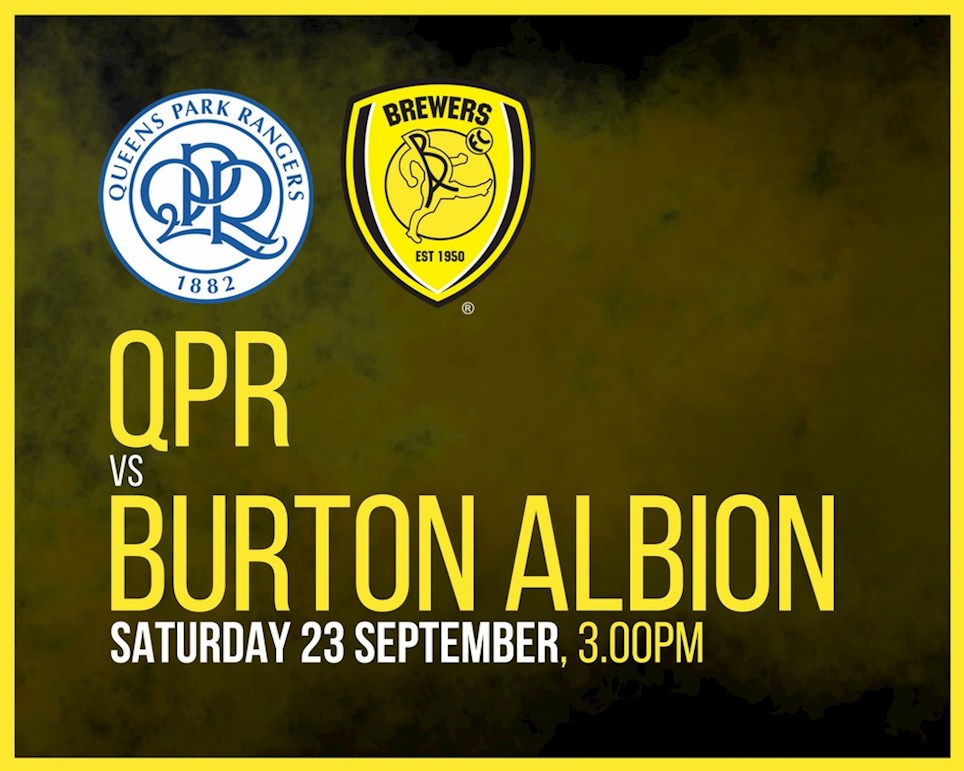 
THE Brewers are back in Championship action tomorrow afternoon when they take on Queens Park Rangers at Loftus Road.

Another clean sheet on the road laid the foundation for another draw and valuable away point at Queens Park Rangers. After the goalless stalemate against Norwich this was another battling performance from Albion who arguably had the better chances to win the game in the first half through Sean Scannell.

The London born winger was often Albion's best attacking outlet in the first half with at least two chances that tested Alex Smithies in the Rangers goal. Rangers became more of a threat after making changes at half time but typicaly resilient defending from the Brewers saw them remain three points clear of the Championship bottom three with two home games on the immediate horizon.

With the game against Manchester United out of the way it was back to the bread and butter of the Sky Bet Championship for the Brewers and with it a return to the starting line-up that brought about a welcome victory last time out against Fulham. The only change to the squad as a whole was the return of Hope Akpan to the substitutes bench in place of Matty Lund.

Albion made a positive start to the game getting on the front foot from the first whistle and winning a couple of early corners. Smithies remained untroubled though as a depleted Rangers back line dealt with the early threat. The Brewers were certainly snapping into the challenges to ein back possession whenever they lost it and a misplaced pass from Rangers gave Luke Murphy the chance to set up Sean Scannell but seeking a better opportunity to shoot the on loan Huddersfield man spurned the chance to test the keeper with a right foot effort eventually finding himself closed down by two Rangers defenders on the edge of the box.

Scannell had an even better chance to open his Burton account on 12 minutes. A delightful ball over the top from Kyle McFadzean allowed him to use his pace to drive into the penalty area. Cutting back onto his right foot he beat Smithies all ends up at his near post but the Rangers keeper got lucky as the ball came back off the post and somehow ended up his his grateful arms.

QPR's first real effort in anger came from Jamie Mackie on 12 minutes as a quick breakout released the experienced forward in on the left hand side of the penalty area. There was real danger as he unleashed a shot but a crucial deflection took it into the side netting. It was real end to end stuff now and from Rangers' corner Scannell burst clear on the break to set up Sordell who in turn won a corner at the other end. From there Albion then found themselves on the receiving end as the home side sprinted upfield on the break through Luke Freeman and Conor Washington to win another corner.

The Londoners almost snatched the lead in bizarre circumatsnace on 18 minutes when Freeman whipped in a cross and although it eluded anhyone in a blue and white shirt the ball hit Jamie Allen inside the six yard box and was heading into his own net before Bywater mopped up on the line.

Scannell was finding plenty of time and space when drifting out wide and he soon had another chance cutting in to test Smithies but this time the keeper held on to his curling shot.

Both sides were passing with confidence now and Rangers worked their best chance yet on 32 minutes, Pawel Wszolek turning well inside Ben Turner and crossing for the onrushing Mackie to fire over the bar.

Freeman was invited to shoot from distance on 36 minutes when Turner's clearing header reached him a good 25 yards from goal but Bywater was behind it all the way as it flew into his waiting arms.

Albion found themselves under some fierce pressure as the half started to edge towards the half time interval but after frustrating the hosts in and around the box it was left to Yeni Ngbakoto to try a long range effort that was never seriously threatening the Burton goal.

Both sides continued to look for the breakthrough before referee Andy Madley's half time whistle and Albion arguably ahd the best chance with Warnock sending a peach of a cross into the Rangers box which in the end proved too good for anybody to get on the end of.

Ngbakoto was replaced for the second half by summer signing Bright Osayi-Samuel making his R's debut and the physical presence of Matt Smith in attack was called upon by Ian Holloway with full back Darnell Furlong making way.

However it was Scannell with the first chance of the second half. A long ball from McFadzean caught Rangers napping at the back and the Burton man looked favourite to get there until Smithies belatedly came off his line to grab the ball off his head.

Osayi-Samuel quickly had chance to use his pace as he attacked John Brayford down the Rangers left and pulled the ball back across the box. Fortunately for Albion the ball was behind the run of his fellow substitute affording the Brewers chance to clear.

Rangers attacked with good purpose on 57 minutes and went close to the opening goal as Wszolek nipped in behind to set up a chance for washington. The striker flicked the ball on but Buxton was there on the line to clear and keep Albion on level terms.

Albion quickly made their first change of the afternoon with the unlucky Scannell making way for Wednesday's goalscorer Lloyd Dyer.

Rangers though were cranking up the pressure on the Burton goal looking to continue a run that had seen them score twice in each of their home league games this season. Former Albion loanee Alex Baptiste almost set them on their way when he was positioned on the edge of the box to pick up a half cleared corner and return the ball with interest, Akins the man stationed inside the six yard box to head the ball away before a save from Bywater was needed.

The home side mide their final change with a little over twenty minutes of the game remaining and it was another attacking change with Mackie withdrawn in favour of Idrissa Sylla. The striker almost had an imediate impact winning a free kick just outside the box from McFadzean. Freeman stepped up and curled the ball over the wall but Bywater confidently plucked it out of the air despite the fact it looked as if the ball was just going to clear the crossbar.

Albion quickly another change and in the same vein as Rangers it was an attacking switch. Luke Varney, so impressive in leading the line at Old Trafford on Wednesday was sent on to replace Sordell to add impetus to the Burton attack. And a third substitution for the men in yellow quickly followed with Allen replaced for the more physical impact of Hope Akpan in the midfield engine room.

Freeman was looking like the biggest threat to the Burton goal with his quick feet and close control and he flashed a left foot effort wide of the post on 79 minutes that had more than a few nervous glances from Burton players as it flashed wide of the target.

Rangers were continuing to press and there was a big coming together between Wszolek and McFadzean as the Burton man cleared on the edge of the penalty area and both collided as the Rangers man threw himself in to block the clearance.

An almighty scramble on the edge of the Burton box on 88 minutes almost gave Rangers a clear chance to break the deadlock but brave goalkeeping from Bywater kept the ball out. To be fair had the ball gone in then an offside flag from the assistant would have ruled it out anyway.

Neither side could fashion a match winning chance in stoppage time. It would have been harsh on either side to come out of the game with nothing in truth but Albion's point ensured that they continued their good record against the men from Loftus Road. Four games played and still unbeaten is something for Albion to be more than pleased with.


THE Brewers are back in Championship action tomorrow afternoon when they take on Queens Park Rangers at Loftus Road.

TICKETS for Burton Albion’s trip to Queens Park Rangers in the Sky Bet Championship are now on sale.

Season ticket holders and priority members can purchase their tickets now, before all remaining tickets are released on to general sale at 10AM on Monday 11 September.

Albion supporters should note that ticket prices will increase by £5.00 on the day of the fixture, so fans are advised to buy their tickets in advance.

The easiest way to buy tickets is online, although you can purchase over the phone by calling 01283 565938 or by visiting the club shop during opening hours.