It was all summed up for Albion when, after dominating long spells of the game, a final chance of the match fell to Lucas Akins' from a corner and with the last kick of the game the ball bounced off his shin and dropped wide of the target.

How Albion left empty handed will have them scratching their heads on the way back but their failure to back up long spells of pressure on the Bradford goal with clinical finishing is what probably cost them dearly.

The hosts scored with just one of their two attempts on target when Payne found the net via the inside of the post completely against the run of play and although they had spells of controlling midfield they rarely posed a serious threat to Stephen Bywater in the Albion goal apart from a three minute spell straight after the goal. Had Albion not been so profligate in their finishing on a night when they failed to fashion a clear opening for talismanic striker Liam Boyce, then it could all have been so different.

Joe Sbarra, after picking up an ankle injury against Doncaster on Saturday was the only member of Albion's first winning league line-up of the season to miss out at Bradford. After making his full debut at Shrewsbury Town in last Tuesday's Carabao Cup first round victory David Templeton was handed a first league start for the Brewers. Albion named a full bench of substitutes with Jamie Allen recovered from his back problem sufficiently to take his place amongst the replacements where there was also a place for Will Miller continuing his recovery from a knee injury picked up back in January. Fitness coach Chris Beardsley completed the bench after being registered on Monday as a precaution.

Albion started brightly with a spell of pressure around the Bantams box with a couple fo dangerously positioned free kicks proving to be an early test for the home defence.

City began to settle with some patient passing although the first couple of shots in anger came from striker Eoin Doyle whose efforts from distance were snatched at and slightly wayward in the opening quarter of an hour.

The Brewers continued to look comfortable going forwards and on 21 minutes came the first examination of Richard O'Donnell in the Bantams goal. A powerful burst down the right from Lucas Akins got Albion on the front foot and when Sordell and Fraser helped it on to Boyce on the other side of the pitch the Irishman had chance to dink a teasing ball into the middle. Akins, coming inside to support got the faintest of flicks forcing O'Donnell to make an awkward save, the keeper grateful that the loose ball fell to one of his own defenders to clear the danger. Buoyed by this Albion pressed forwards again and Templeton got chance to run at his man and deliver a low cross into the centre that somehow managed to evade everyone in a white shirt inside the Bradford box.

It was the signal for a sustained spell of pressure around the home side's box. Albion were quicker to the ball and looked hungrier for it but the ball was not dropping for them inside the area. But all Albion's good work was undone on 33 minutes when Ben Turner tried to nick the ball off the toe of Scannell and only succeeded in directing it across the face of the penalty area into the path of PAYNE who neatly evaded a couple of challenges before stabbing the ball beyond Bywater and in off the post. The goal could not have been any more against the run of play but emphasised the adage that it is important to take your chances when on top.

It almost got worse for Albion as Bradford soared in confidence and Akpan found himself free at the back post but only able to fire straight at Bywater before Doyle headed inches wide from Josh Wright's cross.

Bradford finished the first half with a free kick pumped into Albion's box but the Brewers were able to comfortably see off the threat. They had looked good in large spells of the first half but had it all to do again in the second to come away with a first away result of the season in the league.

Sordell managed to get a shot away inside the opening sixty seconds after the break, cutting in from the right to pull a left foot shot just wide and the former Coventry man spurned an excellent chance barely a minute later as Templeton found room on the left to cross in with Ryan McGowan scuffing a clearance into the path of the Burton man who fired a first time effort over.

It was a bright start to the half for Sordell and moments later he robbed Adam Chicksen to get to a raking crossfield ball, his strongly hit cross coming to Templeton who headed just over from fifteen yards.

Referee Chris Sarginson took a somewhat lenient approach when McGowan clumsily brought Boyce down after the striker had got goalside of his man chasing a long ball out of defence. A free kick had to suffice and when Fraser's ball in was only half cleared McFadzean saw a shot from the edge of the box deflected wide of the goal by one of his own men in front of him.

Fraser went closest yet just after the hour mark with a storming run through the centre culminating in a driven shot across O'Donnell that whistled just past the upright to his left.

Bradford, backed by their vociferous home support, tried to inject some attacking threat into their own second half performance and it was Scannell who had their best moment of the half getting in down the right but firing high over the bar.

McGowan did eventually go into Mr Sarginson's book when he rashly sent Boyce tumbling as Albion tried to counter on City after a spell of pressure and with a quarter of an hour to go Templeton made way for Marcus Harness in a straight swap on the left hand side.

The young winger was quickly involved and with ten to go he could easily have won a free kick on the edge of the box or maybe even a penalty but play went on and he had to settle for winning a corner after picking himself up after McGowan's challege to fire a deflected effort wide.

Elliot Hodge was sent on for the final eight minutes in place of Sordell allowing Akins to move out to his more natural wide position on the right and it was from a Hodge cross that Harness sent a mistimed header wide of the target with seven to play.

Albion continued to press for that elusive equaliser and when a long angled ball was knocked down by Harness the ball came for McFadzean whose floated effort just went too high over the crossbar.

Akins' missed opportunity summed up Albion's frustration as they slumped to the turf on the final whistle to end a disappointing night in West Yorkshire.

IF you still haven’t got your ticket for tonight’s away trip to Bradford City, there is still a chance for you to see the game live and in person.

You can still purchase tickets from the Pirelli Stadium until 2PM today, while tickets are still available to purchase today at the Northern Commercials Stadium, with an increase in price of the adult tickets to £25.

The Brewers face the Bantams coming off the back of their first three points of the season, having beaten Doncaster Rovers 1-0 at the Pirelli Stadium on Saturday. Bradford suffered defeat at the hands of Chris Powell’s Southend and are looking for their first victory since the opening day of the season.

U11s: £5 (when purchased with adult tickets)

Disabled supporters must be in receipt of DLA at the higher level, or middle rate for mobility. 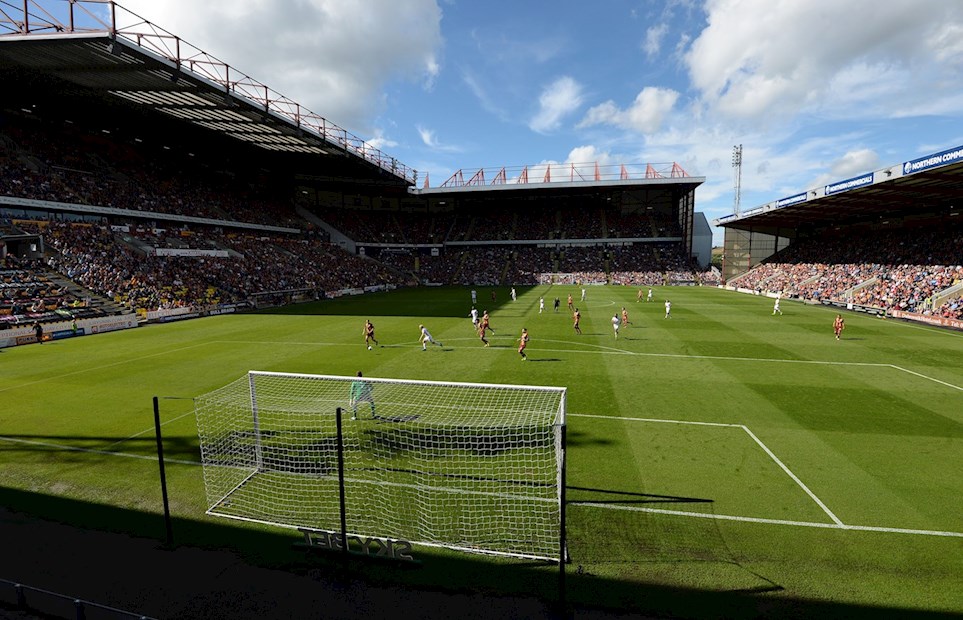 
TICKETS for our away game at Bradford City on Tuesday, August 21st (7.45pm kick-off) are now on sale.