The Southampton loanee whose strike ultimately secured victory in the last round against Nottingham Forest steered his effort wide of Darren Randolph after Jamie Allen had hit the post seconds earlier.

Albion had to survive second half pressure as the home side looked to salvage the game but a resilient defensive display saw the Brewers through on a historic night on Teesside.

For the historic quarter-final tie at the Riverside manager Nigerl Clough opted for a 5-4-1 formation in an attempt to reach the last four of a major cup competition for the first time. There were, in fact, only two changes in personnel from the narrow defeat at Fleetwood on Saturday with Marcus Harness and Jake Buxton elevated to the starting line-up after coming on as substitutes at the weekend. Buxton slotted in as one of three centre backs alongside John Brayford and Ben Turner with Harness deployed as the right wing back option. With Liam Boyce sidelined with a thigh problem Lucas Akins was given the nod to lead the line with Devante Cole unavailable having appeared in the first round for parent club Wigan Athletic.

Albion certainly got off to a positive start and a period of concerted pressure on the Middlesbrough goal gave the home side some nervy early moments with Harness only denied by a last ditch tackle that diverted the ball off the youngster and out for the safety of a goal kick. From there Middlesbrough began to settle and a surging run from Dael Fry quickly had Marin Barithwaite in down the right channel. With Albion looking for an offside flag as the Dane ran through the ball was quickly whipped across for the supporting Jordan Hugill who was inches away from converting six yards out.

Brad Collins was forced into making his first save of note on 12 minutes when the dangerous Stewart Downing was allowed too much time to pick out a pass to Lewis Wing and from a tight angle inside the box the youngsters rising shot was pushed to safety.

Hugill saw the first yellow card of the evening from referee Michael Oliver when he slid into a mistimed challenge on Stephen Quinn midway inside the Burton half. Even given the slick and wet conditions it wasnt a great tackle.

Reece Hutchinson was finding space to burst forwards on the left and when Scott Fraser picked out his run on 26 minutes there was danger for the hosts who had to rely on an excellent intervention from Aden Flint to prevent Akins getting a vital touch inside the box.

Downing tested Collins with a set piece on 28 minutes after Albion had conceded a free kick thirty yards out but the Chelsea loanee was equal to it moving across smartly to his left to push the ball away from goal.

Quinn had a decent sight of goal on 33 after Albion worked a short corner routine well and fashioned a chance for the Irishman on the edge of the box. Picking up Hutchinson's pass the opportunity to shoot opened up but his left foot effort curled away from goal as Darren Randolph watched it sail wide.

Hugill managed to break the offside trap on 37 minutes but again Collins was equal to the test narrowing the angle superbly at the near post to deny the striker and even when the ball came loose to Hugill again he could not find the net with Buxton magnificently throwing himself in the way of the shot to frustrate him again.

And it was the skipper who read the situation superbly to force Braithwaite into shooting wide just when it looked like the Brewers defence had been opened up.

After soaking up a lot of Middlesbrough pressure Albion almost had the perfect riposte on the stroke of half time as Fraser led a breakout down the left and when Hesketh dummied the cross it opened up a glorious opportunity for Harness, the youngster steering a left foot effort agonisingly just over the bar. It would have been a perfect end to the haf had it gone it but the Brewers were far from out if it at the break.

It was Harness who was quick off the mark at the start of the second period as well doing well to wriggle the wrong side of Flint before the big defender managed to get a vital interception in to ensure that all he conceded was a corner but it was about to get better for Albion as they grabbed the lead on 48 minutes. Fraser did well to set up Jamie Allen and it looked like the chance had gone when his shot cannoned back off the post but HESKETH was there to pick up the loose ball and drive it home.

Harness was now playing more on the left following a half time tactical switch to 4-1-4-1 and it was opening up chances for him. The youngster found more space inside the box and was only denied from a curling right foot shot by Flint's challenge.

It could have got even better for the Brewers as Fraser got goalside of Danny Batth who was caught ball watching but the former Wolves defender did well to get back and make a timely challenge as the Brewers midfielder was about to pull the trigger.

With Albion still in front 63 minutes in Tony Pulis called on his big guns to try and retrieve the situation. Britt Assombalonga, so often a scorer against the Brewers and young talent Marcus Tavernier were summonsed from the bench to replace Hugill and Mo Besic.

The home side were certainly playing with more urgency now and a clutch of corners certainly had Albion stretched at the back but Brayford and Buxton in particular repelled anything that came their way.

Albion by no means were sitting on their lead and Fraser produced another of those bustling runs down the left that ended with him in the penalty area and Flint again proving to be the man in the way at the expense of a corner.

Pulis played his final card of the game with Ashley Fletcher added to the Middlesbrough attacking options as Braithwaite made way but Albion were still sticking to their task manfully.

Brayford was the man to provide another timely interception as a beautifully angled ball picked out Downing out wide on the right and the Brewers defender reacted quickest to hack the ball clear from inside his own six yard box.

With ten minutes remaining it was time for Albion's first change and it saw Hesketh who had run himself into the ground replaced on the right by the returning Ben Fox.

Flint, having been a key player at the back for the home side then somehow contrived to miss a glorious cvhance to equalise with six minutes remaining. Tavernier did very well on the left to whip in a teasing cross and the big defender, from only a couple of yards out somehow contrived to head wide.

It was all hands to the pump in the closing stages and Collins had to make a vital dash from his goal to clear as Assombalonga bore down on goal trying to latch onto a through ball.

Middlesbrough pumped plenty of balls into the box but this was Albion's night. And What a night for Clough and his men!

TICKETS for tonight’s historic Carabao Cup quarter final away at Middlesbrough are now off sale at the Pirelli Stadium. However, tickets will be available to Brewers fans from 6PM this evening at the Riverside Stadium.

This is the first time in the club’s history that we have made it to the last eight of the Carabao Cup and any Brewers supporters still tempted to make the trip up to Teesside tonight will be able to purchase tickets from the away support tickets office at Middlesbrough’s Riverside Stadium.

There is no change in price for tickets purchased on the day. 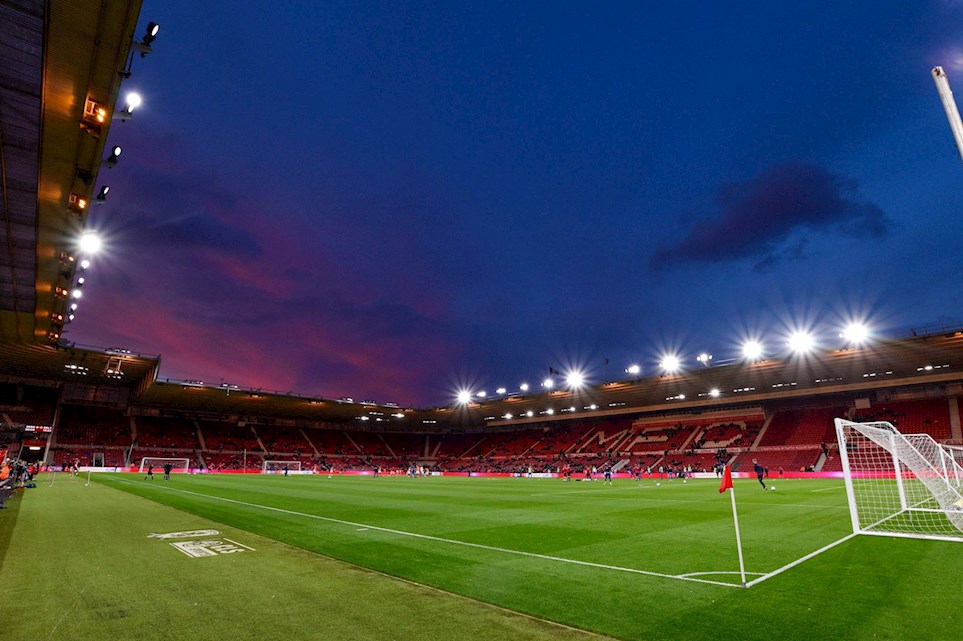 
THERE are still spaces available on our official club coaches for the away fixtures against Middlesbrough and Luton Town. Spaces are limited, so don’t delay if you want to back the Brewers on the...


TICKETS for the Carabao Cup quarter-final tie away at Middlesbrough are now on sale.