ALBION equalled their biggest home league win of the season with a 3-0 beating of Blackpool as Liam Boyce, Jamie Allen and Lucas Akins all found the back of the net to complete a rousing victory over the Seasiders

Boyce got the Brewers off to as flyer after just six minutes with his first goal since January 5th prodding home Akins' cross before Allen doubled Albion's advantage as an error from substitute keeper Myles Boney proved costly before Akins wrapped up victory in the second half heading home Boyce's cross.

Albion showed a freshened look in the starting eleven as three changes made for a tweak to the formation as well. The back four remained the same as for the last couple of games but there was a change in midfield with Kieran Wallace coming in for Scott Fraser who dropped to the bench. Up front there was a slightly narrower approach with Will Miller sitting in just behind a front two of Boyce and Akins, David Templeton and Marcus Harness finding themselves alongside Fraser on the bench.

In difficult, blustery conditions it was Blackpool with the first chance as Chris Long just failed to make contact with Liam Feeney's testing cross.

Albion thought they should have had a penalty when John Brayford, on the overlap, went down as he cut across his defender but the Brewers were ahead inside six minutes anyway. Miller's deeper lying role allowed him the vision to pick out the advanced run of Akins and his low cross was converted by BOYCE inside the six yard box.

It was almost two quickly after when Miller found himself out wide on the right and able to send in a low cross that Wallace turned wide with a first time shot.

Albion also hit the woodwork on ten minutes when Miller set Allen free through the middle and his shot across the keeper came back off the post. A golden chance to get an iron grip on the game.

A difficult start for the visitors got worse before a quarter of an hour was up when keeper Mark Howard went down trying to control a back pass and immediately signalled to the bench that his afternoon was over as Boney was summonsed from the bench for his League debut.

Boney and the rest of his back four looked vulnerable when put under pressure and Boyce felt the full force of a Boney clearance as the substitute had to make a hasty clearance and left the Brewers goalscorer needing some attention to the side of his head.

And Boney's nervy introduction continued on 34 minutes as Albion grabbed a second through the keeper's error. Wallace made good ground on the left and put in a hopeful cross into the middle. ALLEN stretched to get an effort on target that was straight at the keeper. What should have been a routine take turned into a goal as the keeper failed to hold onto the effort and despite the best efforts of Ben Heneghan to clear the assistant was well placed to confirm that it had gone over the line.

Blackpool were struggling to create anything but Jordan Thompson made sure that Brad Collins was alert and on his toes with a rasping drive on 41 minutes that the Brewers keeper dealt with relatively comfortably.

Long found himself in referee Anthony Backhouse's book for what looked an awful challenge on John Brayford right in front of the away dugout as half time beckoned. Albion used the resulting free kick to mount some late first half pressure on the Blackpool goal but the third goal that would have probably been just rewards for their dominance would not quite come.

Despite a promising start from Blackpool at the start of the second half it was Albion with the first real chance after the break, Miller leading a swift breakout to force Boney into a decent save to tip his rising shot over the bar.

Blackpool sent on their remaining two substitutes, Joe Dodoo and Nya Kirby, but before they could have any impact Albion were three to good, Boney punched a Wallace corner out as far as Boyce and the striker twisted and turn inside the box to return the compliment of Akins' earlier assist by flighting a superb ball to the back post for AKINS to rise high and head home.

The Brewers were also able to send on Reece Hutchinson and Alex Bradley late in the game as Wallace and Quinn took a well earned breather in difficult conditions. A great afternoon almost got even better in stoppage time as Colin Daniel ripped an angled drive just into the side netting against his former side.

Blackpool saved their best effort for stoppage time when Kirby twisted on the edge of the box and forced Collins into a good save low to his right to keep his and the Brewers clean sheet. The shut-out of the visitors was almost as welcome as the three goals and points at the end of a highly satisfactory afternoon for Albion.

FANS will be able to pay in cash at the turnstiles for terrace admission to Saturday's home game against Blackpool (kick off 3pm).

But home fans making a late decision to come to see the Brewers or who wish to bring a friend or family member with them on the day, will be able to pay in cash on the turnstiles at both the Don Amott and UK Waterproofing Solutions terraces.

The advanced ticket prices are available up until 5pm tomorrow. 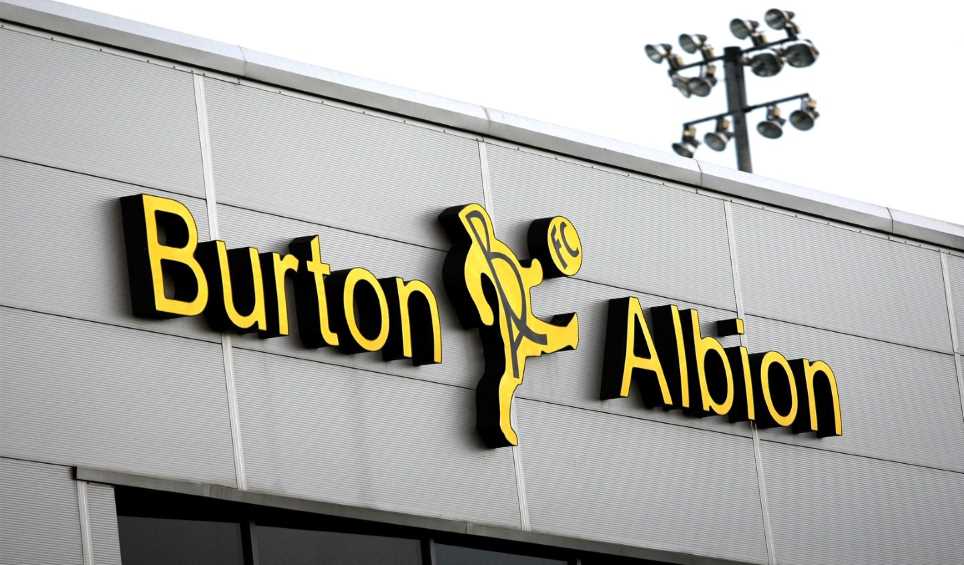 TICKETS FOR THE HOME GAME AGAINST BLACKPOOL NOW ON SALE


TICKETS for our home Sky Bet League One game against Blackpool on Saturday, March 16, (3pm kick-off) are now on sale.