FIRST half goals from Jamie Allen and Kyle McFadzean steered Albion to a 2-1 victory over Sunderland with Albion fending off second half pressure after substitute Chris Maguire had struck early in the second half for the Wearsiders.

Allen was left with a simple finish from Marvin Sordell's centre while McFadzean thumped home a header from David Templeton's free kick.

Albion could have added a third early in the second half but in the end they dug in for an important and impressive victory.

Nigel Clough made three changes for the visit of the promotion favourites. With loan keeper Brad Collins ruled out with a thigh strain it was straight into the starting line up for Dimitar Evtimov just over 24 hours after signing a short term deal with the club. There was good news for Albion with Damien McCrory recovered from a hamstring strain picked up in just the second game of the season. Liam Boyce also returned after international duty. Ben Fox and Reece Hutchinson were the outfield players to make way as Lucas Akins, sporting the captain's armband returned to the right back role.

Albion looked bright in the opening stages and a low ball in from David Templeton ricocheted dangerously inside the Sunderland box before the defence were able to hack it clear on seven minutes.

Sunderland finally sprung to life as an attacking force on the quarter of an hour mark when left back Bryan Oviedo found a yard of space to whip in low cross to the near post that deflected back out to Josh Maja but the youngster dragged his shot a yard wide of the far post. He really should have hit the target.

It was a costly miss as Albion made the Black Cats pay on 19 minutes. Good interplay on the right from Boyce and Akins allowed Sordell to drive to the bye line. The Albion forward got a stroke of luck when his low cross took a deflection across the box but it proved to be a fortuitous one taking the ball right to the feet of ALLEN who calmly finished from six yards.

Templeton warmed the palms of former Albion keeper Jon McLaughlin with a curling effort just moments afterwards as Albion quickly sought a second but it was Albion's debutant keeper who made the more difficult stop on 24 minutes, needing two attempts to gather in a rasping effort from Oviedo on the edge of the box.

Adam Matthews, the Sunderland right back was the first man in referee Dean Whitestone's book for a poor challenge on Templeton as slick passing on the Albion left had the visiting defence momentarily chasing shadows.

35 minutes in and Albion were two to the good. Fraser won a free kick with a busting burst towards the Sunderland box and from the set piece Templeton put the ball perfectly onto the head of McFADZEAN for the big defender to steer home a header from the penalty spot which left McLaughlin rooted to the spot.

Albion's good work was almost undone on 39 minutes when Evtimov seemed a little slow to react to a ball coming back to him and had to hurry to get there before Charlie Wyke. The keeper got there first, 30 yards out, and lashed the ball against the striker with the ball rebounding towards the goal before Ben Turner got back to clear the danger. Wyke was clearly in some discomfort from the challenge and took no further part, departing on a stretcher as Chris Maguire replaced him.

Midfield enforcer Lee Cattermole followed Matthews into the book before half time for a sliding challenge on Fraser as the Scot threatened to burst purposefully towards the Sunderland box.

It was almost a perfect start to the second half for the Brewers as Fraser was denied at the near post by McLaughlin after Templeton had played his fellow Scot in on the outside.

Albion were flying at the start of the second half and only an excellent one handed save from McLaughlin denied Stephen Quinn his second goal in as many home league games. The Sunderland defence at this stage were at sixes and sevens and the visitors goal temporarily led something of a charmed life.

Sunderland made their second attacking change with loan striker Jerome Sinclair sacrificed for the guile and trickery of Aiden McGeady.

The game really opened up as a result and when MAGUIRE lashed in a 25 yarder on 53 minutes the game was set up for a thrilling second half. The ball came across the midfield from a flowing Sunderland move and Maguire instinctively fired home with Evtimov powerless to stop it.

The visitors were the ones flying now and looking to be first to every ball. Oviedo forced Evtimov into another fine save, low to his right and as the ball bounced around the penalty area it was substitute McGeady blazing a shot across goal and not that far wide of the target.

McFadzean was booked for a challenge on Maguire which very much looked like a 50-50 challenge with neither player particularly to blame.

Boyce forced McLaughlin into a smart save at his near post as the Brewers looked to put the game to bed with a two goal cushion and from the corner Albion were unable to really profit as Sunderland looked to get back on the front foot in search of an equaliser.

Evtimov's confident claim of a high cross into the penalty area late on signalled that it was not to be Sund day and it was very much a Brewers day as they pushed into the top half of the League One table.

SATURDAY’S home game against Sunderland AFC will be all-ticket with no cash on the turnstiles admission available for this game (kick off 3pm).

Home supporters will be able to buy tickets on the day with the club shop opening at 9am.

All away supporters will require a ticket before arrival at the stadium.

The advanced ticket prices are available up until 5pm the day before each matchday. 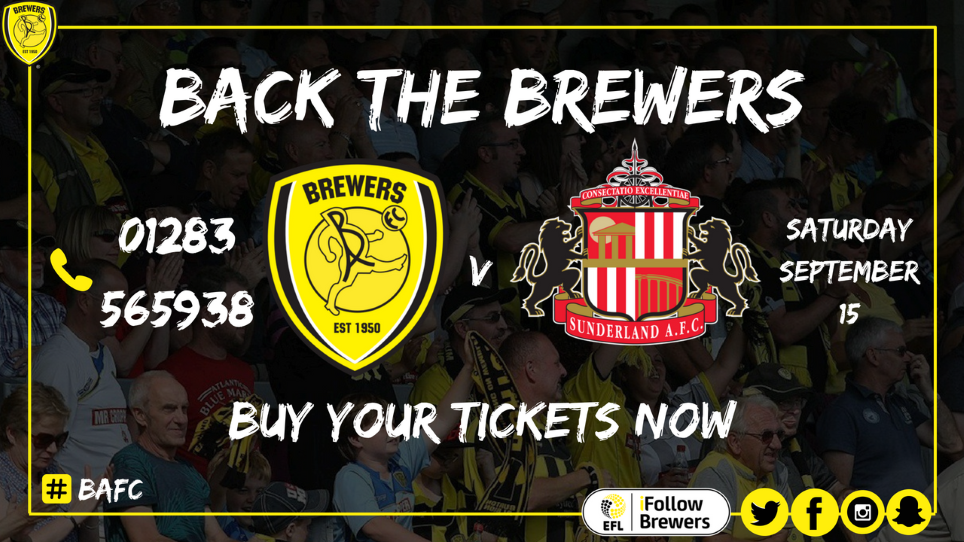 
TICKETS for our home game against Sunderland on Saturday, September 15 (3pm kick-off) are now on-sale.