AN unfortunate own goal from goalkeeper Kieran O'Hara proved to be the difference between the two sides as Albion suffered another frustrating afternoon at the Pirelli Stadium.

Albion had been much the better side until Ben Wiles shot took a deflection onto the post via the foot of O'Hara who was helpless as the ball rebounded and hit him in the face before dropping over the line.

The Brewers twice struck the woodwork at either end of the game and were also denied what looked a stonewall penalty in the second half as the luck, as it did on the opening day of the season, evaded them.

After two away games in a week it was back to the Pirelli and the starting line-up showed one change to the side that grabbed the first league win of the season at Gillingham. Stephen Quinn, having served his one-match suspension and had a run at Port Vale, came back in at the expense of Kieran Wallace in the holding midfield role.

Albion were almost off to a flier inside the first minute. Nathan Broadhead did superbly to control a cross from Lucas Akins deep to the back post and after bringing the ball under his spell the young Welshman created room for a shot from a tight angle that crashed back out off the frame of the goal with John Brayford just unable to capitalise on the loose ball. And it was Broadhead again on eight minutes with a low shot that was smothered by keeper Daniel Iversen after a probing pass from Fraser had opened up the defence.

Although Rotherham began to settle into the game they were unable to seriously trouble O'Hara early on and Fraser should probably have put Albion in front on 19 minutes when an Akins shot on the turn looped up and the midfielder did everything to get there inside the box but could only volley over from eight yards.

Having soaked up the early pressure it was Rotherham that struck on 24 minutes when Wiles tried his luck and O'Hara's luck was out for the second home game running.

Rotherham threatened a second when Kyle Vassell won a free kick and having made a remarkably quick recovery darted down the left to latch on to Daniel Barlaser's quickly taken set piece lashing a swerving effort towards goal from out wide that smacked the face of the crossbar before bouncing to safety.

There was concern for John Brayford when he seemed to come off worse in a 50-50 challenge and needed the attention of Nick Fenton for a couple of minutes before rejoining the fray.

Albion spurned a glorious chance to get back on level terms when Fraser's free kick was met firmly by the head of Boyce but Iversen threw himself to his right to push the ball away. As half time approached O'Hara stood big and tall to prevent Michael Smith from adding to Rotherham's lead after a long ball over the top sought out the big striker.

The visitors were close to doubling their advantage again in the early stages of the second half, defender Clark Robertson getting up highest to meet a corner but seeing his header drop wide of the target from inside the six yard box. Another set piece thrown into the Burton box then required John-Joe O'Toole to made two important clearances in the space of a few seconds when Michael Ihiekwe's back post header caused problems inside the Burton six yard box.

Rotherham were looking bright in attack but there were huge calls for a Burton penalty on 68 minutes when Fraser burst into the box to hunt down a loose ball and seemed to be upended by Richard Wood as he went for goal. Referee Nick Kinseley, however, was having none of it.

Albion sent on Oliver Sarkic for Brayford inside the last twenty minutes in an effort to rescue something from the game with three at the back now the order of the day defensively. And Quinn was later replaced by Wallace to try and find that elusive equaliser.

But it was Rotherham who nearly grabbed the goal that would have sealed their victory when substitute Jamie Lindsay whipped a ball to the back post that just evaded Vassell sliding in at the back post.

Robertson almost put the seal on it late on with a header that was helped over the bar by Daniel at close range but the final chance of the game fell to Broadhead who spurned a glorious chance for a stoppage time equaliser scooping Boyce's low centre over the bar.

There was more late drama in stoppage time when late substitute David Templeton volleyed against the crossbar from Sarkic's header as the visitors held on.

TICKETS for our Sky Bet League One game against Rotherham United are now on sale.

The game takes place at the Pirelli Stadium on Saturday, August 17 (3pm kick-off).

Tickets can be purchased in person at the Club Shop, over the phone by calling 01283 565938 or online by clicking HERE 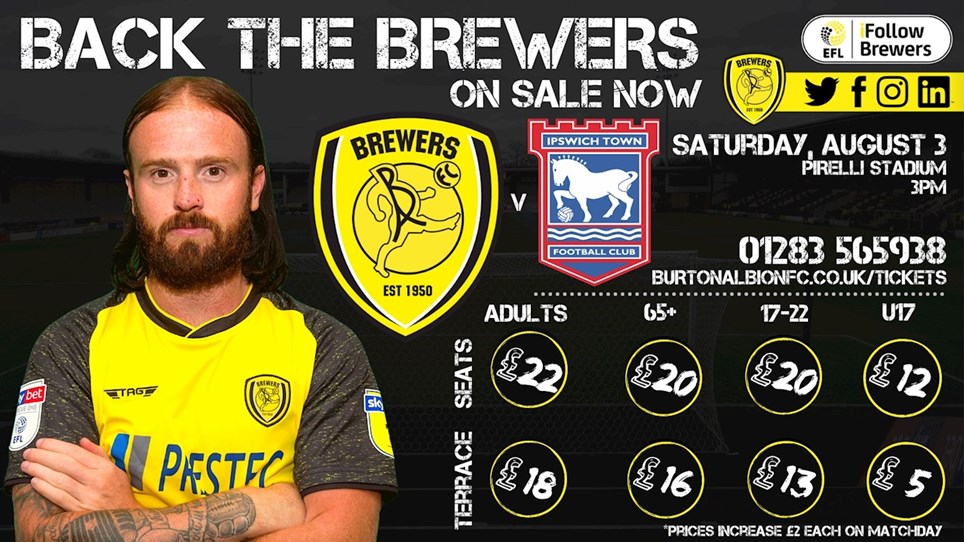 
TICKETS for our opening home Sky Bet League One game against Ipswich Town are now on sale!