It was always going to be a difficult afternoon for Nigel Clough's side after they fell behind inside two minutes to Harry Anderson's near post header from a corner and despite dominating for much of the game they could not break down a resolute Imps defence and were sucker punched at the end as former loanee Tyler Walker came back to haunt his former side after coming on as a substitute and bagging a second at the near post.

Albion's starting eleven showed two changes from the midweek draw with Southend. With John-Joe O'Toole starting his ban following his red card against the Shrimpers it meant a switch to right back for Lucas Akins as Richard Nartey moved across to partner skipper Jake Buxton. Kieran Wallace came into midfield to partner Stephen Quinn as the Brewers moved to a 4-4-2 with Nathan Broadhead fit to return and partner Liam Boyce in attack.

The Lincoln side featured one ex-Brewer with Southampton loanee Jake Hesketh starting the game and Walker on the bench.

The Imps got off to the best possible start by taking the lead inside two minutes. From a bright opening the visitors won a couple of quick corner sand fro the second ANDERSON glanced the ball home at the near post.

Albion soon camped themselves in the Lincoln half with Boyce having two efforts from distance, one earning a corner that resulted in Akins heading into the side netting from a tight angle.

Hesketh soon found himself in referee Ben Toner's book for a dive after he looked to make more out of a challenge from Jake Buxton than there actually was and after blazing a long range effort well over the goal Ryan Edwards found more frustration when his name was taken for stopping Harry Toffolo taking a quick throw in down the Lincoln left.

But Lincoln still posed a threat and when Hesketh teed John Akinde up 22 yards out his rasping low drive cannoned back out of the post with Jorge Grant only able to find the arms of O'Hara from the follow-up effort.

As play quickly switch to the other end it was Lincoln keeper Josh Vickers called into action, Fraser playing Boyce in down the left channel and the keeper getting an important block on the shot to divert it wide of the post.

Broadhead's afternoon was done just after the half hour as he pulled up inside the centre circle before limping off to be replaced by Templeton.

Lincoln looked to the height and power of Akinde from set pieces and the striker was unable to keep his header down from another corner as the Imps went in search of a second and they suffered a blow when skipper Jason Shackell limped off after seeming pulling his hamstring making a clearance.

A frustrating half for Albion ended with Fraser flagged offside just as it looked like a breakthrough might be on the cards. Another second half fightback required.

Aside from a nervy moment from O'Hara as he was quickly closed down by Hesketh whilst clearing a Buxton back pass there was little of note in the early stages of the second half as Albion continued to push forwards in search of that elusive equaliser.

Fraser was looking the likeliest to open something up for Albion either with a pass or a jinking run and he found his way into a shooting position on 66 minutes but could not keep his angled effort down as another half chance went begging.

Albion had shouts for a penalty late on when both Fraser and Edwards appeared to be clipped inside the box but the referee was not convinced enough as the second half continued to frustrate as much of the first half had.

Pressure continued on the Lincoln goal and Colin Daniel could only head a Fraser corner over the net as time ticked down for Albion to find a leveller.

After Lincoln had soaked up all that Albion could throw at them they could have double their lead when Grant lashed a shot against the bar late on before WALKER sealed victory for the vistors with a predatory near post finish after good work from Anderson on the right.

BURTON Albion fans can pay in cash at the turnstiles for Saturday’s game at home to Lincoln City (kick off 3pm).

Fans looking to make a late decision to attend the fixture can pay in cash at the turnstiles to access the terraces in the UK Waterproofing Solutions Stand (Popside) or the Don Amott Stand - behind the goal.

The Russell Roof Tiles Stand (away terrace) will be open to travelling Lincoln fans as well as a section of the Carling Stand (seats). Away supporters cannot pay in cash at the turnstiles but can buy tickets on the day from the ticket windows. 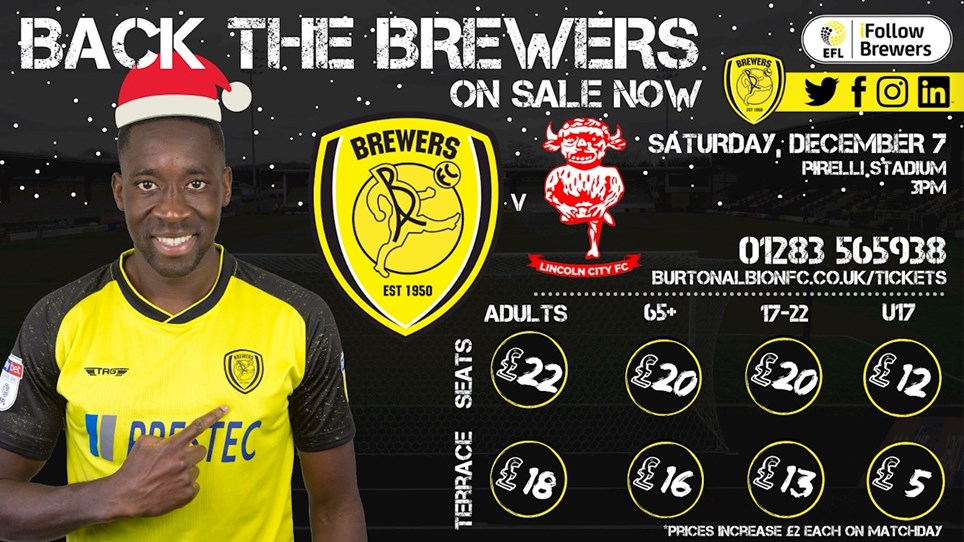 
TICKETS for our Sky Bet League One game at home to Lincoln City at the start of December are now on sale!