The damage was done in the first half as Town raced into a 3-0 lead thanks to goals from Nicky Adams, Ryan Watson and Charlie Goode with the Brewers struggling to deal with the aerial threat posed by Keith Curle's side.

Ryan Edwards looked to have got the Brewers back into the contest a minute after Goode's goal with a nneat finish in first half stoppage time but any chances Albion had of staying in the hat for the next round were gone when Sam Hoskins fired in on a Northampton breakaway with twenty minutes remaining.

Scott Fraser's calm finish in the final minute of normal time was scant consolation for the Brewers.

With a place in the fourth round at stake Nigel Clough opted to make three changes bringing three of his experienced heads back into the starting line-up. Colin Daniel, Stephen Quinn and Liam Boyce all returned with Reece Hutchinson, Joe Sbarra and Oliver Sarkic all dropping to the bench.

Albion made a brisk start and after the assistant kept his flag down, Edwards was allowed to raid down the right before Town skipper Charlie Goode came across to clear the danger at the near post. The pressure was maintained from the corner with a good situation opening up for David Templeton, the Scot trying to catch keeper David Cornell out at his near post but ending up only finding the arms of the keeper.

But Northampton grew into the game and took the lead on ten minutes. A long throw into the heart of the Burton box casued problems and when the ball dropped to Adams, 12 yards out, he calmly sidefooted the ball into the bottom corner.

Templeton rattled a volley just wide as Albion sought a quick response and from a Scott Fraser free kick Daniel volleyed a deflected effort onto the roof of the net.

Cornell produced a good double save on 20 minutes as Albion continued to ramp up the pressure in seach of a leveller. Templeton was again the man to test him with a low effort that the keeper needed a second go at claiming with Edwards sniffing for the loose ball.

Halfway through the first period and the Cobblers doubled their lead. Sam Hoskins did well on the right to work space for a cross and he found the head of WATSON to thump home past O'Hara.

Templeton squandered a glorious chance to get Albion back in the game on 32 minutes, Scott Wharton misjudged his header and laid the ball into the path of Templeton who was able to run into the area but with Boyce begging for a pass to his right opted to try and go alone eventually finding himself squezzed out by a combination of Cornell and the recovering Wharton.

A difficult afternoon got worse for Albion when Richard Nartey limped gingerly from the field on 37 minutes with former Cobbler John-Joe O'Toole coming on to replace him at the back.

As the game ticked into first half stoppage time it was Northampton's aerial power again that undid the Brewers. Adams swung in a teasing corner and GOODE was there to stoop and steer home a header into the bottom corner.

But Albion got an immediate response as EDWARDS was able to nip past a challenge inside the box to stab the ball beyond Cornell.

Albion started well after the break and could have got back to within a goal on 48 minutes. Fraser again was the architect picking out Boyce inside the box but after weaving past a challenge the striker lifted his shot against the face of the crossbar. So close to another goal.

Boyce was inches away from connecting with a curling cross from Templeton on 54 minutes as the pressure continued on the Town box and it as pretty much one way traffic at this stage.

HOwever it all went wrong with twenty minutes to play when Templeton was guilty of losing possession allowing Northampton to break quickly, Vadaine Oliver eventually setting up HOSKINS to fire home.

That was the game over, as a contest and despite Albion still having penlty of ball in and around the Northampton box they could not open up the visitors defence.

It took until the final minute when FRASER produced a moment of quality curling in from the edge of the box but it was all too little too late for Albion.

BURTON Albion fans will be able to pay with cash on the turnstiles for our Emirates FA Cup Third Round tie against Northampton Town (2.01pm kick-off).

Fans who wish to attend without making a prior commitment can pay with cash on the turnstiles for the UK Waterproofing Solutions Stand (Popside), and the Don Amott Stand (behind the goal).

Cash on the turnstiles for this fixture is available for home fans only; away fans will need to purchase a ticket in order to gain entry to the ground. 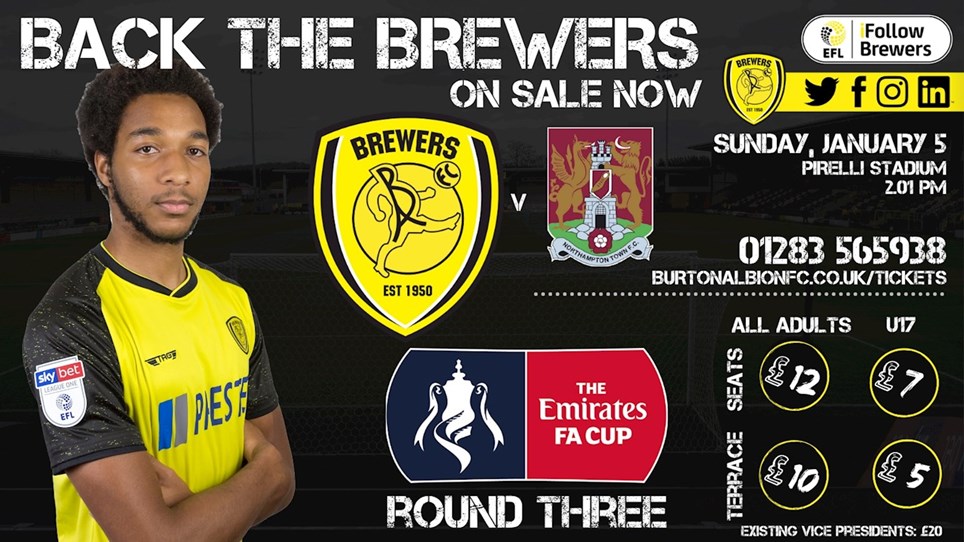 
YOU can back the Brewers in our Emirates FA Cup run on Sunday, January 5 (2.01pm kick-off) for just £10 for an adult’s terrace ticket - and tickets are now on sale!