Lucas Akins had given the Brewers a deserved first half lead three minutes before the break when he converted Oliver Sarkic's near post cross but the game was back in the balance again six minutes into the second half when left back ibou Touray got up well to convert fellow full back Scott Wiseman's deep cross.

Albion though hit back with three more goals as they found their scoring touch with David Templeton, John Brayford and Oliver Sarkic all finding the back of the net to take the game away from the Ammies.

In a surprise change to the stsrting line-up Kieran O'Hara made a quick dash back from international duty to take his place in goal having made his full debut over the weekend. Brayford also returned to the side as did Sarkic after both sat out the Leasing.Com Trophy game against Mansfield last week.

O'Hara was soon called into action as Oscar Threlkeld latched onto a loose ball inside the box forcing the stopper to go to his right and push the ball away from danger.

It was a rare moment of pressure early on for the visitors as Albion soon got their probing passing game going although Chris Neal remained untroubled in the opening stages.

Sarkic got in behind the City defence on 14 minutes but his low cross was just behind both Ryan Edwards and Akins bursting into the box to try and get a finishing touch.

Albion had another good chance to open their account on 19 minutes when Scott Fraser was upended just outside the box giving John-Joe O'Toole the chance to venture forward from the back and curl the free kick inches over the bar.

Skipper Jake Buxton forced Neal into an excellent save on 29 minutes when his header from an Edwards free kick looked destined for the top corner until the Salford keeper got across well to divert it wide of the post. The visitors goal also led something of a charmed life just after the half hour as Fraser's cross became something of a pinball inside the box with nobody able to apply a finishing touch.

From nowhere Salford were handed a golden chance to break the deadlock when a free kick was floated into the Burton box and nobody picked up defender Carl Piergianni who had all the time to place his header but put it straight at O'Hara.

Half time seemed to be rapidly approaching at the end of frustrating half when AKINS struck three minutes before the break. Sarkic teasing his way into a crossing position and his delivery to the near post enable the Brewers striker to squeeze the ball past Neal from close range.

Salford made a bright start to the second period and were level within six minutes of the restart. Albion were convinced there was a foul on Kieran Wallace as the left back pushed forwards and was bundled over. Referee Marc Edwards played on and TOURAY rose high at the back post to head home Scott Wiseman's cross.

As the game looked like it might be slipping from Albion's grasp TEMPLETON produced a moment of real quality when Fraser found him in space on the right and he lashed a fantastic effort into the far corner giving Neal no chance.

Albion then grabbed a third with twenty minutes to play as BRAYFORD's back post header bounced around inside the six yard box and eventually found its way into the back of the net. Brayford ran away claiming it and nobody was going to argue with him over it.

Fraser limped off after seemingly taking a wehack on his hip before Albion put clear daylight between the two sides, Akins sending SARKIC away to cut inside his man and find the far corner of Neal's net.

It was all over for the visitors now and Albion safely negotiated the closing stages to wrap up a second round tie with Oldham Athletic the weekend after next where the Brewers will be looking to finish things at the first time of asking.

TICKETS for our festive Sky Bet League One game at home to Rochdale are now on sale!

The game takes place at the Pirelli Stadium on Saturday, December 21 (3pm kick-off).

This is the first of two home games either side of Christmas, with Tranmere Rovers following the Dale at the Pirelli on Boxing Day. 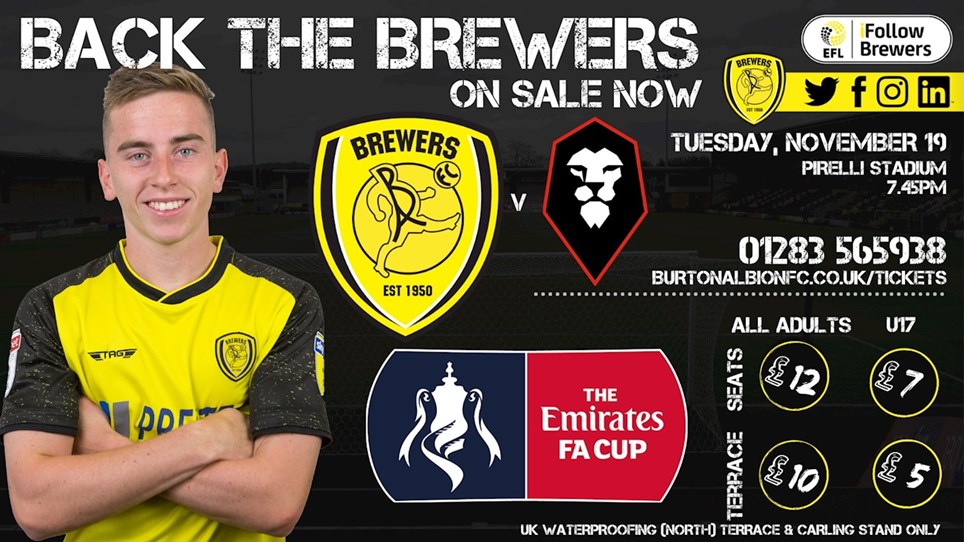 
BURTON Albion fans wanting to stand in the UK Waterproofing Solutions Stand (Popside) for our FA Cup First Round replay against Salford City will be able to pay in cash at the turnstiles - with NO...


TICKETS are now on sale for the FA Cup First Round replay as the Brewers face Salford City at the Pirelli Stadium on Tuesday (kick off 7.45pm).