Both sides hit the post in a pulsating encounter, Zain Westbrooke lashing a 25-yarder against the upright midway through the first half before substitute Nathan Broadhead hit the exact same post with a curling free kick, neither effort taking a kindly bounce off the post to end up in the back of the net.

Coventry extended their unbeaten start to the season and the point was sufficient to send them top of the table but they wont get many tougher away assignments than this.

After the international break and with the opportunity for injuries to heal there was only the one change from the side that played Bristol Rovers last time out in League One. Skipper Jake Buxton was still troubled by a rib injury meaning a first Football League start for Chelsea loanee Richard Nartey.

Brewers boss Nigel Clough also sprung something of a surprise with his formation which from the start appeared to be more of a midfield diamond with Oliver Sarkic brought inside form his usual wide role to play just behind the front two of Liam Boyce and Lucas Akins.

The game began at almost breakneck speed with both sides looking to play some excellent attacking football. Albion, perhaps helped by their change of shape began very brightly and former Brewer Kyle McFadzean, captaining the Sky Blues, had to make a couple of timely interventions early on to offer good protection to his keeper Marosi.

Coventry certainly posed a threat with their pace and power up front although it was midfielder Liam Walsh who kept Kieran O'Hara on his toes with two decent efforts. However 23 minutes were showing when City went closest yet with a rasping drive from Westbrooke that cannoned back off O'Hara's left hand post with Jordy Hiwula just unable to make the most of the rebound.

Albion burst forwards looking to respond and when Sarkic curled in a delicious low cross Boyce was inches away from steering it past Marosi.

With Coventry just starting to element a degree of control on the play Albion switched to their more accustomed 4-3-3 formation. The switch was certainly helping both full backs push on and Brayford went closest yet for Albion on 40 minutes when Akins invited him in on the overlap and Albion's captain on the day could only find the side netting.

McFadzean steered a hopeful header well over the bar from a City free kick late on in the half but it was Albion who finished on top as referee Oli Langford's half time whistle blew to bring to an end an entertaining first half.

A good start was needed to capitalise on the first half showing and Albion almost had the lead on 48 minutes when Akins provided the support for Boyce and burst into the box with Marosi just getting something on his low shot to turn it away for a corner.

Sarkic then picked out Akins at the back post with a teasing cross but the Brewers striker could not quite stretch enough to bring it under his spell.

John-Joe-O'Toole picked up a yellow card for a strong challenge where he won the ball but his follow through was deemed too strong.

The game continued to flow from end to end with Albion pressing for long spells but just unable to get the better of the Sky Blues back four marshalled well by McFadzean.

Nathan Broadhead replaced Sarkic for the final twenty minutes as Albion looked to push for a breakthrough but it was Jordy Hiwula who almost provided it for the visitors with a quarter of an hour remaining with a stinging effort that O'Hara got everything behind to beat it away.

Broadhead then took on set piece duties when Fraser was unceremoniously upended by McFadzean to earn the Sky Blues man a yellow card and Broadhead almost meted out the perfect response when his free kick smacked against the inside of the post but came out again.

It almost had the feel of the sort of game where both sides were destined not to score and Albion were grateful at the death when substitute Gervane Kasteneer tried to beat O'Hara late on and Hiwula, lunging in at the far post, failed to make contact with the goal at his mercy.

An excellent advertisement for League One football and a thoroughly deserved point apiece. On to another tough game on Tuesday at Portsmouth.

HOME fans will be able to pay in cash at the turnstiles for terrace admission to tomorrow’s home game against Coventry City (kick off 3pm).

But home fans making a late decision to come to see the Brewers will be able to pay in cash at the turnstiles at both the Don Amott and UK Waterproofing Solutions terraces.

These two stands are for home fans only. No away fans will be admitted to the Don Amott and UK Waterproofing Solutions stands. Stewards will be present at the turnstiles to assure that only home fans can gain admission to these terraces.

All home fans who wish to sit down will need a ticket.

All visiting Coventry fans will need a valid ticket for the away sections of the ground.

The advanced ticket prices are available up until 5pm today (Friday). 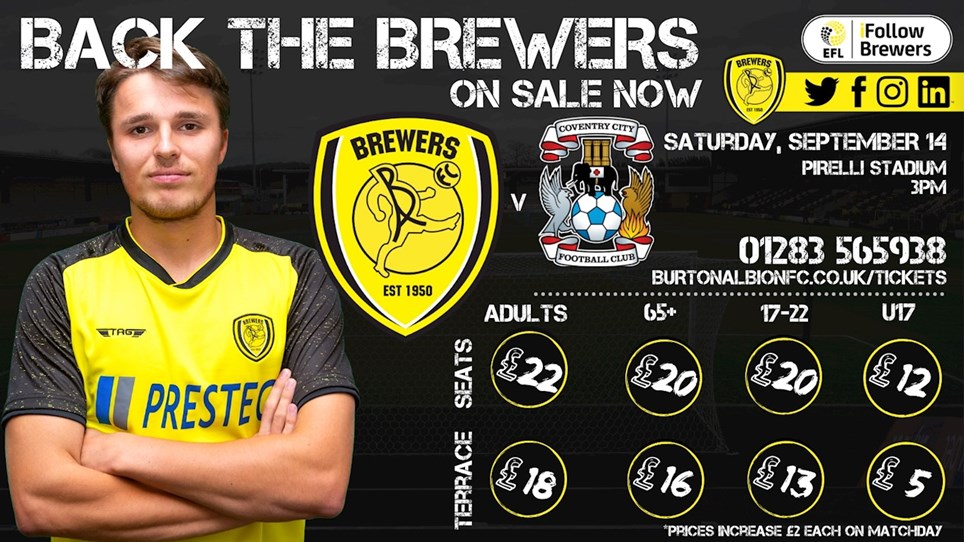 
TICKETS for our Sky Bet League One game against Coventry City on Saturday, September 14 (3pm kick-off) are now on sale.