Nigel Clough's Brewers produced a gutsy and spirited performance to give themselves hope of avoiding relegation by beating local rivals Derby County 3-1 at the Pirelli Stadium.

Liam Boyce, with his first goal at the Pirelli, man of the match Luke Murphy and Lucas Akins were all on target as Albion scored three goals at home for the first time this season and provide a much needed home victory after seventeen winless games on home soil going back to September last year.

All Derby could muster in response was a David Nugent equaliser after Boyce had given Albion the lead and Stephen Bywater averted a late rally by the Rams by saving Matej Vydra's penalty.

It was a special day at the Pirelli Stadium as Albion chalked up another home victory over their local rivals and there was even time at the end for club captain Shaun Barker to make his first appearance of the season as a subtitute earning a superb ovation from both sets of supporters.

With injuries decimating the Burton squad the options for Nigel Clough to change things around were limited. Fortunately both John Brayford and Kyle McFadzean were recovered from their bouts of illness to take up places in the back four where there was also a return for Ben Turner who had not started a game since the beginning of February away at Aston Villa. With leading scorer Lloyd Dyer forced out with a hamstring injury Joe Sbarra was drafted in on the left and Lucas Akins pushed further up on the right as Luke Murphy also came back in with Darren Bent unable to play against his parent club.

Despite Derby having a lot of early possession there was precious little threat on the Burton goal amidst a relatively low key start to a game between two sides seperated by such a short distance. In fact it was Liam Boyce with a shot on the turn from the edge of the area that represented the first real effort on goal although even that failed to cause Scott Carson any real concern.

Dangerman Matej Vydra had been relatively quiet until midway through the forst half when he picked up the ball 25 yards out and saw an opportunity to go for goal. Fortunately for Albion Jacob Davenport was on hand to get in a timely block that prevented the Czech from getting anywhere near the target.

Two minutes later and the Brewers werew ahead. Hope Akpan dispossessed Andre Wisdom allowing Boyce to venture forward and see a shot blocked. Sbarra managed to recover the ball wide out on the left and send in a teasing right foot cross. Murphy was at the back post and although his first touch took him away from goal he had the intelligence to send it back across goal for BOYCE to tap home.

Albion's lead lasted just five minutes though before NUGENT equalised. Tom Lawrence was afforded too much time on the left hand side to pick out a curling right foot cross and the experienced striker was able to steal in at the back post to head home.

The Brewers were quickly given a chance to respond again when Huddlestone fouled Davenport giving the Manchester City starlet the opportunity to send in a free kick, McFadzean inches away from glancing it in from twelve yards out.

Huddlestone almost made amends for his foul with a towering back post header from Andi Weimann's corner on the left but suddenly there was much more of a tempo to the game as both sides looked for the next goal to try and assert some control on proceedings.

Skipper Jake Buxton was the first man to see a yellow card when his challenge sent Weimann sprawling in full flight as he tried to head towards the Burton penalty area.

The Rams were almost the architects of their own downfall as half time approached as Boyce picked the pocket of Curtis Davies whose clearance eventually fell to Sbarra who had Carson goling full length to his right to push the ball away.

The Brewers' second goal owed much to MURPHY's persistence and skill as the midfielder robbed Baird of possession out wide on the right and with Brayford's overlapping run opening up the space inside the on loan Leed's man cut inside before curling a beautiful left footed effort around Carson to send Albion in at half time with a precious lead.

Derby came out strongly after the break but as Albion started to sit a little deeper they found it difficult to fashion any serious chances. Vydra tried to create something from a free kick but only found the waiting arms of Bywater as his delivery had too much weight on it and Lawrence's free kick on 63 minutes was deflected wide after Brayford had sent the former Leicester man down to earn himself a booking. A flurry of corners came Derby's way as a result but Albion's defence fended off the threat.

By now Gary Rowett had sacrificed the guile of Joe Ledley for the youthful skill and trickery of Kasey Palmer in midfield to try and add some pace and an injection of creativity to proceedings.

Yet again it was Albion who posed more of a threat and when Boyce caught Huddlestone in possession the Rams were short on numbers at the back. Sbarra delivered another telling cross and although Murphy's shot was blocked it fell for Akpan whose close range effort was deflected for AKINS who could not miss.

Derby sent on Cameron Jerome to add some more power to their attack but it was Nugent who squandered a good chance to double his tally for the afternoon on 74 minutes blasting over after Vydra had taken a free kick quickly to set the Rams on the attack again.

Akpan also saw a yellow card from referee James Linington after taking Jerome out inside the centre circle as the substitute tried to launch a counter attack for Rowett's men.

Albion had to send on Jamie Allen for Sbarra as the Academy product began to suffer with cramp and with Albion determined to try and shore things up.

Derby were handed a lifeline on 89 minutes when Jerome was bundled over in the box by Buxton but Bywater came up trumps by saving Vydra's penalty with his foot. It was not going to be Derby's day.

Barker's late cameo was the perfect ending to the day for Albion who can still go to Sunderland next week in the hope of pulling off a great escape.

TICKETS for Burton Albion's home game against Derby County are now on general sale to home fans with a previous buying history of at least two fixtures this season.

The Championship fixture takes place on Saturday, April 14 (kick off 3pm) at the Pirelli Stadium.

Any home supporter who has bought tickets for at least two previous Burton Albion matches can buy tickets as follows.

The easiest way to buy tickets is online at www.burtonalbionfc.co.uk/tickets. Alternatively, Albion fans can purchase tickets over the phone (01283 565938) or in person by visiting the club shop during normal opening hours. 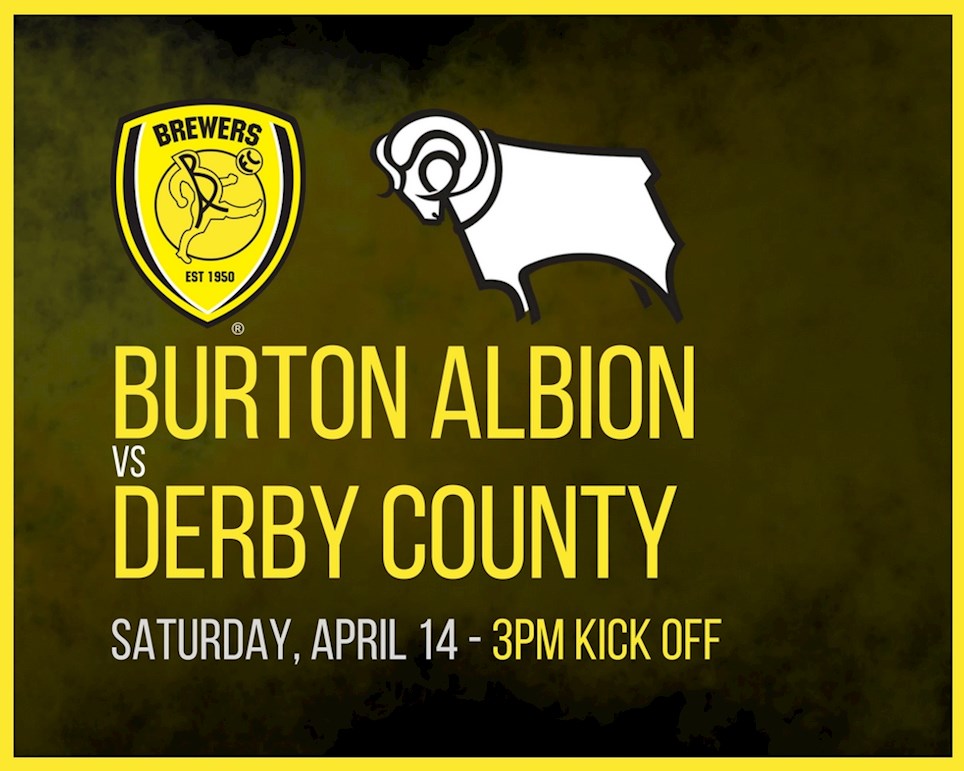 
TICKETS for Burton Albion's home game against Derby County are set to go on sale.