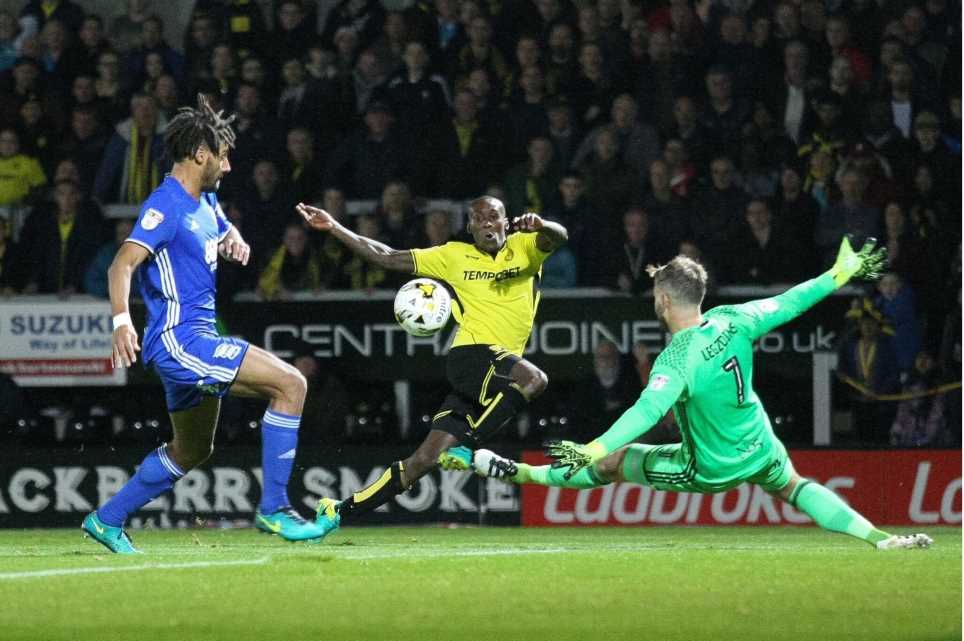 Lloyd Dyer was the toast of the Pirelli Stadium as he once again proved to be Burton's matchwinner against the Blues to hand the Brewers their first league win of the season. His calm 66th minute finish completed an excellent second half turn around which had earlier seen Marvin Sordell cancel out Jacques Maghoma's first half opener.

Nigel Clough reverted to 3-5-2 for the visit of the Blues and was able to call upon Jackson Irvine again after the midfielder served his one match suspension against Middlesbrough in the week. The return of the influential Aussie was the only change to the midweel line, replacing Damien McCrory. New loan signing Sean Scannell was ineligible having not been registered in time to feature in the game.

After a bright start from the visitors, Clayton Donaldson straying offside as former Albion favourite Jacques Maghoma tried to play him through, it was Albion with the first chance of note. A well flighted corner from Matty Palmer was met by the head of Jake Buxton but his header was into the waiting arms of David Stockdale in the Birmingham goal.

Early headed chances continued to come along and Matty Lund was the next to miss the target, under pressure from Emilio Nsue, putting Marvin Sordell's deep cross wide of the target.

Donaldson was then to be found drifting out wide on the right to exploit some space and a very direct run and cross was only halted by a well timed intervention at the near post by Kyle McFadzean mopping up the danger.

Albion were guilty of squandering an excellent chance on 22 minutes. A great ball in from Dyer picked out the run of Lund but as the summer signing waited for the ball to come down for him he was closed down and he had to try and feed in Sordell to his left but his shot on the turn was blocked by Stockdale.

Jutkiewicz was starting to make his presence felt inside the Burton box and after flicking a header wide as Craig Gardner tried to pick him out. The big striker then forced a low save from Bywater before playing a significant role in the Blues taking the lead on 29 minutes. Donaldson again found space on the right and crossed deep to the back post for Jutkiewicz to head back into the danger area where MAGHOMA reacted quickest to blast home from close range.

Midfielder David Davis tried to quickly double the advantage of the visitors but his snap shot from the edge of the box was always rising and off target.

Tom Naylor almost managed to embarrass Stockdale in the Birmingham goal on 39 minutes. After working the crossing opportunity his effort failed to pick out a yellow shirt but landed just over the head of the keeper and on the roof of the net.

A bright start to the second period for Albion brought about an early chance for Palmer on the edge of the box but rushing to get his shot away could only scuff his effort into the clutches of Stockdale. The keeper was more stretched moments later when the Albion midfielder had another sight of goal and forced the ex-Brighton keeper into a diving stop.

Albion's early pressure was rewarded on 50 minutes as SORDELL struck to level things up. The former Coventry man span superbly onto Luke Murphy's pass to open up a shooting opportunity on the edge of the box and his angled effort unerringly found the bottom corner.

The Brewers had their tails up and Naylor was close to his first of the season stealing in at the back post onto Irvine's angled cross but his first time effort flew over.

Albion had shouts for a penalty when Murphy appeared to be clumsily bundled over just inside the box but referee Tony Harrington waved away strong shouts from the Burton players.

Birmingham responded with Jutkiewicz heading straight into the arms of Bywater and Donaldson performing acrobatics to volley a shot against the post as the Blues looked to re-establish their advantage.

Instead it was Albion who struck the next blow as DYER continued his record of scoring against the club where he had a short loan spell in 2015. An excellent spell of passing around the Birmingham bos culminated in an exquisite back heel from Akins into the path of Dyer who took and touch and from close range buried it past Stockdale.

Birmingham sent on new signing Isaac Vassell to introduce more pace up front and he soon made his presence felt and gave Albion substitute Damien McCrory a hard time down the Albion left.

Imposing midfielder Cheikh N'Doye got up well to meet a left wing cross and head over unchallenged soon after Dyer's goal but Albion were now defending resolutely to repel the Birmingham threat.

With ten minutes left Albion saw Lund leave the pitch on a stretcher afetr a heavy challenge in midfield and he was replaced by Luke Varney as Albion reorganised.

Birmingham launched some heavy pressure late on but some excellent defending kept City at bay and secured three precious points.

TICKETS for Burton Albion's televised game against Birmingham City are still on sale.

The Brewers take on Harry Redknapp's men at the Pirelli Stadium under the lights tonight, and tickets are still on sale to home supporters.

Last time the Brewers hosted Birmingham City it was Nigel Clough's men that ran out 2-0 winners, thanks to goals from Lloyd Dyer and Jamie Ward.

Burton also beat Birmingham City 2-0 away from home last season, a game which proved to be Gianfranco Zola's last game in charge of the Blues.

The easiest way to buy tickets is online by clicking here. Alternatively Albion fans can purchase tickets over the phone (01283 565938) or in person by visiting the club shop.