Nathaniel Mendez-Laing's fine finish to put the Bluebirds back in front in first half stoppage time handed the Welshmen a crucial lead to take into the break and Callum Paterson's emphatic finish midway through the second half ultimately condemned the Brewers to another defeat as they looked to start the home stretch of the Championship season in positive fashion.

With thirteen days since their last outing the injury list at the Pirelli Stadium had receded sufficiently for some of Nigel Clough's injured charges to return to action. Most notably John Brayford returned to the team at right back following with his calf problem whilst fellow former Bluebird Ben Turner made it as far as the bench in his recovery from a similar problem picked up at the start of February at Aston Villa. With Damien McCrory not travelling to South Wales due to his wife being due to give birth any day now, Tom Flanagan switched to the left with Tom Naylor and Kyle McFadzean continuing their partnership at the heart of defence. In midfield Marvin Sordell continued on the right having recovered from the knock that forced him off at Molineux during the half time interval. Lloyd Dyer continued on the left whilst Jamie Allen and Luke Murphy were paired in midfield. Liam Boyce, after his international run out last weekend continued in an attacking role just behind the returning Bent.

On the bench Turner was joined by loanees Jacob Davenport and Martin Samuelsen. Davenport, who picked up a knock towards the end of the defeat to leaders Wolves, was rested to the bench with Monday's game against Middleshrough in mind and Samuelsen was back with the club after illness and well enough to take his place amongst the substitutes.

A promising start for Albion saw them have an effort cleared off the line inside the first two minutes. Jamie Allen swung in a free kick after Boyce had been baulked outside the area and the Irishman was up well at the back post to head goalwards only for a blue shirted defender to clear.

Boyce was in the thick of it again with less than five minutes on the clock getting up well to beat Neil Etheridge to the ball after Allen had pumped another teasing cross into the penalty area only for his header to loop over the crossbar.

Cardiff managed to get on the attack after seven minutes and it was their goal hero at the Pirelli on the opening day, Zohore setting himself up for a curling effort that Stephen Bywater was able to watch go wide of his post.

Albion continued to look bright and purposeful and Murphy wasnt too far away with a drive from outside the box following a corner taken by Sordell on the right.

Cardiff, though, carried the greater threat in front of goal and when it came they buried their first real chance of the game just after the quarter of the hour mark. Junior Hoillett was able to find time and space to advance down the left and his low cross was calmly turned home by ZOHORE six yards out.

The Cardiff lead lasted less than five minutes though as Albion showed great spirit to hit back. A superb ball by Boyce inside the full back allowed Dyer to steam into the box before sliding the ball across goal for BENT to tap home from close range at the far post.

The home side were rattled and skipper Sean Morrison almost had his side back in front on 27 mionutes connecting well with Joe Bennett's curling free kick but only found the midriff of Bywater. A yard either side and the Bluebirds would have been in front but on this occasion fortune favoured the Brewers.

Fortune was also on the side of Clough's side when Craig Bryson missed the target on 33 minutes. A through ball from the half way line tempted Bywater to come and challenge for the ball near the touchline but against the pace of Mendez-Laing he was always second favourite and the winger was able to skip around the challenge before sending in a cross that came to the Derby County loanee twelve yards out. With defenders getting back onto the line the Scottish midfielder set himself for a first time shot that went wide. The most relieved man was most definitely Bywater who could only watch on as he tried to regain his ground.

Naylor found himself in referee Simon Hooper's book for a foul on Hoillett that was inside the D and gave the Bluebirds another chance to test the Brewers defensive resolve. Zohore's clipped effort from the free kick which was tasken short to him was deflected over the goal by the defensive wall allowing Albion to regroup defensively.

The pressure was still on and delightfully chipped ball into the box from Hoillett seemed to have Morrison in for a certain goal but Bywater stood tall to block his close range effort and make up for his earlier rush of blood to the head.

Boyce was instrumental in getting Dyer in behind the defence again on 43 minutes as Albion sought to sneak ahead before the break but a loose touch from the Brewers winger took him away from goal before driving an angled drive over the bar.

Instead as the clock ticked into added time it was the hosts who struck to deadly effect. Zohore flicked on a hopeful ball and MENZEZ-LAING was able to run through before hitting a blistering effort that flew into the top corner from a difficult angle at the near post.

Albion even had chance to equalise before the break but a tame effort from Allen on the edge of the box was pouched by Etheridge after some excellent link up play to set the midfielder through on goal.

The home side picked up the pace right from the start of the second period and they really should have had a third goal within sixty seconds of the game restarting. An angled pass towards Zohore had the Dane in behind the defence and when Naylor slipped trying to turn and close him down the striker's run towards goal was unchecked. To his credit he tried to do the unselfish thing and play in Mendez-Laing supporting to his right but his pass lacked the pace to get there and allowed Flanagan to make a timely interception.

In the aftermath referee Hooper showed a yellow card to McFadzean which seemed to be for an off the ball block on Callum Paterson who required treatment before play could restart.

Zohore's strength and power as a hold-up man set Cardiff up for another chance on the hour mark but a superb challenge from Brayford at the back post denied Hoillett a simple headed finish that would surely have put the game to bed once and for all. From the resulting corner Cardiff did have the ball in the back of the net when Morrison rose high to head home but referee Hooper had spotted a push inside the six yard box to immediately rule out the Bluebird's skipper's finish.

The third Cardiff goal eventually came on 64 minutes and again it owed a lot to the pacy wing work of Hoillett. The Canadian sent in a cross that was deflected by Bryson into the path of PATERSON who lashed home to comprehensively beat Bywater.

Hoillett was inches away from getting himself on the scoresheet less than two minutes later as he cut inside onto his right foot and sent a shot towards the bottom corner only for a deflection off an Albion defender to sent it spinning wide of the post.

Boyce was sacrificed on 69 minutes to facilitate the introduction of Davenport meaning a change to the 4-1-4-1 formation that has suited the Manchester City loanee since his move to the club.

Cardiff replaced Zohore with former Bolton striker Gary Madine and the January signing was almost gifted a goal seconds after coming on. Bywater's attempted clearance clattered into the striker and when the ball eventually came down and bounced the striker was unable to make the most of it and guide it into the empty net. The Albion keeper was also a tad lucky when another hurried clearance rebounded off Liverpool loanee Marko Grujic and flew wide.

After his injury lay-off Brayford lasted until 75 minutes in before he was replaced by Tomas Egert for the closing stages of the game.

The Brewers threatened to get back into it and make for a nervous ending for the home side when Etheridge failed to deal with a corner and Bent, beyond the back post rattled in a low shot that was deflected wide at the expense of a corner.

Joe Sbarra came on for the final nine minutes as Bent made way towards the end and Sordell took up the role of the lone striker, Albion looking for any glimmer of a chance to snatch anything from the promotion chasing Blue.

The game seemed to be drifting towards its climax but Madine got up well inside the six yard box at the start of stoppage time but Bywater stood firm to reach out an arm and prevent his header from adding insult to Albion's injury as the fight for survival now goes down to the final seven games starting with Middlesbrough on Monday afternoon.

Any Brewers Supporters who still want to buy tickets after that time can purchase tickets on the day at the Cardiff City Stadium.

Tickets bought on the day will be cash and are only available from the away ticket office by gate 12.

Prices on-the-day are as follows:

Coach details are as follows:

Depart: 10.15AM (Please arrive at the Pirelli Stadium at least 15 minutes before departure time) 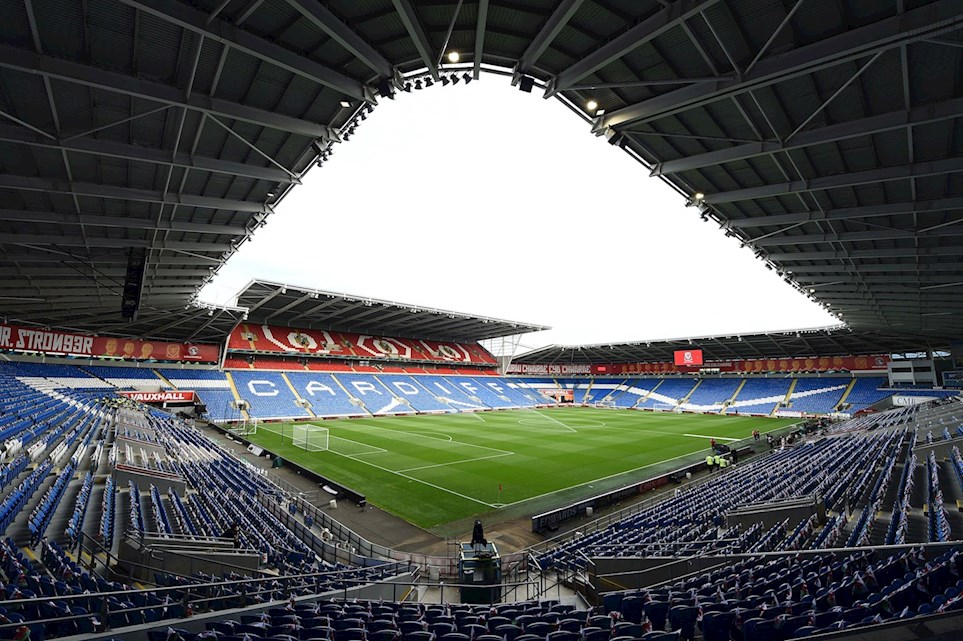 
TICKETS for Burton Albion's trip to Cardiff City on Friday 30 March are now on sale.