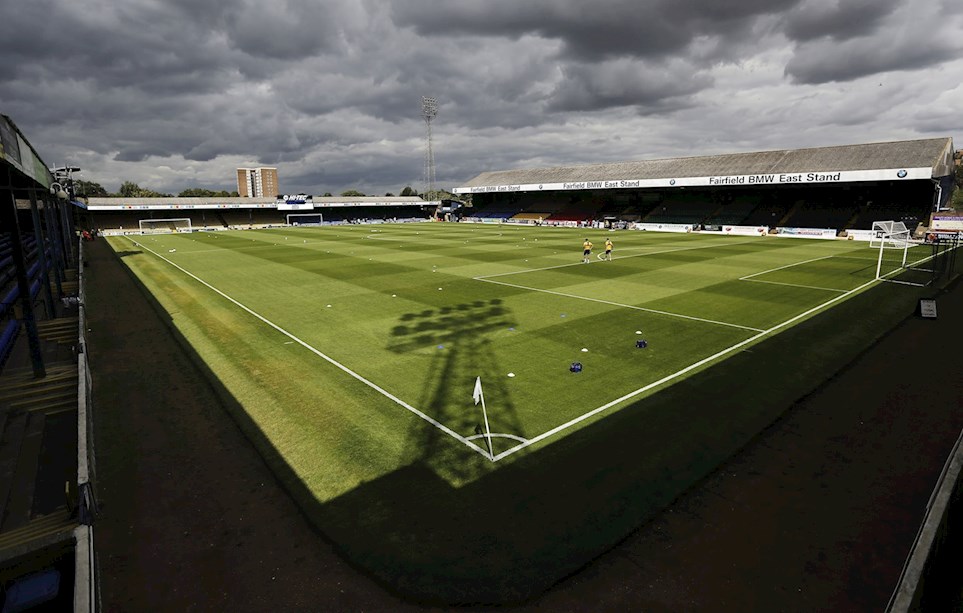 ALBION'S frustrating Easter finished with a second successive defeat as Southend United took the points from a scrappy game at Roots Hall, the home side coming out the better of a 3-2 result to ease their relegatio.

To compound the Brewers frustration they also lost leading scorer Liam Boyce to injury with the influential frontman stretchered off with what looked to be an ankle injury after an awkward landing in the box as he went to head the ball towards goal.

Southend grabbed a two goal lead thanks to Sam Mantom and Harry Bunn before John Brayford's third of the season halved the deficit and had the home side on edge. Substitutes Michael Kightly and Timothee Dieng combined from a set piece for the latter to restore the home side's two goal advantage but Marcus Harness' clam finish ensured that the home side were living on their nerves in the closing minutes before ultimately hanging on for the points as Albion's hopes of a rousing end to the season took another blow.

With the short turnaround after the Good Friday game against Portsmouth niggly muscle injuries for both Colin Daniel and Scott Fraser had not recovered sufficiently for them to play a part against the struggling Shrimpers. Their absences gave an opportunity for Academy products Reece Hutchinson and Ben Fox to stake their claims for more regular involvement.

A bright start from Albion almost saw them cut open the Southend defence within three minutes. Harness was able to make good progress down the right and find Jamie Allen. His low ball across seemed to be intended for Fox but he ran over the ball allowing Lucas Akins to try and get on the end of it with keeper Mark Oxley spreading himself to prevent the Burton man getting a shot away.

And Albion kept up the early pressure on a nervous home side with Akins close again on six minutes heading over from Boyce's dinked delivery to the back post.

Southend began to edge their way into the game with striker Simon Cox looking lively as the focus of their attack but his first sight of goal on nine minutes only resulted in a wayward strike that was never really threatening the goal. The home side, desperate for a win to ease their relegation fears, broke forward menacingly again a minute later, Bunn racing away on the end of an angled through ball and his cross was bundled awkwardly behind by Kyle McFadzean with a blue shirted opponent steaming in at the back post to try and convert.

Southend were growing in confidence and after Bunn had been given too much room to turn and scuff a shot straight at Bywater the belief rose amongst the home side and they were ahead on eighteen minutes. A route one ball down the right channel found the run of Cox and his delivery through the six yard box was perfect for MANTOM, sliding in, to steer into the roof of the net.

Just when Albion looked as if they were getting back into things they suffered a real blow with the injury to Boyce. After jumping to meet a Harness cross and flicking it wide the Northern Ireland international feel awkwardly and stayed down clearly in trouble and requiring a stretcher to leave the pitch on. A big blow and a sad sight for all Albion fans. His departure meant an extended appearance from the bench for Alex Bradley who slotted into an advanced role.

With Albion a little off the pace when the game restarted after an extended delay for Boyce's treatment Southend almost capitalised with Kieran Wallace twice having to make vital interventions inside his own box and Brayford also getting in the way of a chance for Bunn who again found too much space inside the box.

With half time just seconds away Allen showed a burst of pace to threaten the Southend box slipping a ball through for Akins but after taking it wide of the keeper he could not quite get an effort on target as Oxley did well to recover his ground and smother.

Albion's afternoon went from bad to worse inside three minutes of the second half when the home side doubled their lead. Cox saw a close range effort was saved at point blank range at the far post after a corner had been allowed to reach him all too easily and the striker was quickest to react to the save, sliding the ball across the box for BUNN to convert from close range.

The lethargic start to the half wore off and Albion set about their task of trying to get back into it. A superb cross in from the right by Brayford on 56 minutes curled through the box and just evaded three onrushing Burton attackers all looking to capitalise.

And Albion were back in it on the hour mark as BRAYFORD this time went for goal himself steering Hutchinson's left wing cross into the corner of the net with Oxley unable to react quickly enough to make any attempt to save.

But as Albion began to believe they could come back and equalise they almost conceded a third, substitute Luke Hyam forcing Bywater into an excellent save as he swatted a rising shot away from goal after good work from left back Sam Hart created the opening.

Southend turned to an Albion old boy for the final twenty minutes of the game with the introduction of Kightly to provide some more attacking impetus in search of the third goal that would put the game to bed, Bunn making way.

The winger almost made an instant impression with a free kick from almost 30 yards that Bywater eventually fumbled around the post for a corner. But as the pressure was maintained a free kick conceded by Quinn right on the edge of the box allowed him to send over a ball to the back post for DIENG to head home.

Albion were not done yet though and Oxley had to produce an excellent save at full stretch from Akins whose header was on target from a searching Brayford cross with ten minutes to go.

Two further changes for Albion saw Damien McCrory replace Quinn and there was also a late appearance for Josh Clarke as Brayford made way for the final eight minutes.

The pressure was back on the home side for the final five minutes when HARNESS ran onto a pass from Fox to slot calmly past Oxley to set up a tense finish for the home side. Try as they might though Albion could not force one last opportunity as Southend defended on the edge of their box manfully for the five minutes of added time.

TICKETS for our away game at Southend United on Easter Monday (April 22, 1pm kick-off) are now on sale!

You can back The Brewers on the road this Easter at Roots Hall, and we have been allocated 500 tickets for this game.

Buy your tickets now by calling 01283 565938, by visiting the Club Shop at the Pirelli Stadium or via our online ticket store.

Advance prices are as follows:

Should tickets be made available on the day for purchase (this will be confirmed either way at a later date), prices would be as follows:

**Please note the Emergency Services price is NOT available on matchday for home or away fans so need to be purchased in advance.

Buy your tickets now by calling 01283 565938, by visiting the Club Shop at the Pirelli Stadium or via our online ticket store.