Albion were only a goal adrift after half an hour after Kevin De Bruyne had headed home after just five minutes at which stage the omens for Nigel Clough's side did not look good. Marcus Harness could, and perhaps should have equalised on twelve minutes but he missed the target from eight yards.

Three goals in seven first half minutes proved a hammer blow to the Brewers as Jesus grabbed his first two and Oleksandar Zinchenko curled in a spectacular first time effort.

A further four goals in thirteen second half minutes swept Albion aside as Jesus added two more and both substitute Phil Foden and Kyle Walker showed no mercy inside the penalty area. Riyad Mahrez completed the scoring seven minutes from time with another clinical finish.

For Albion's historic first ever appearance in the semi-final of a national cup competition Brewers boss made three changes at least one of which was enforced through injury. Stephen Quinn, substituted early in the 4-0 victory at Rochdale on Saturday failed to recover from a niggling groin problem and had to make way for Kieran Wallace who replaced him at Spotland. There was also a return to the team for ex-City youngster John Brayford who didnt feature against Dale. He replaced Ben Fox who dropped to the bench. Up front saw the welcome return of Liam Boyce to lead the line with David Templeton left out meaning a switch to a wide role for Lucas Akins.

Left back Zinchenko had the first shot at goal for the home side as they looked for an early breakthrough but Brad Collins was able to see his effort sail comfortably wide. But any hope that Albion had of frustrating their hosts for too long disappeared inside five minutes. Captain on the night David Silva curled in a trademark cross from the left channel and DE BRUYNE rose six yards out to head home.

After his hat-trick heroics on Saturday Harness spurned a glorious chance to put the Brewers level. Akins worked hard down the left and pulled a cross through the penalty area that came to the youngster beyond the far post. Taking the chance first time he curled his effort just wide of the target. A great opportunity to stun the home crowd.

That gave the Brewers some real belief and with Fraser and Boyce driving at the City penalty area there were a few uncomfortable moments as the cup holders had to defend manfully especially when Albion won their first corner of the game on sixteen minutes.

City thought they had double their lead on 18 minutes when record signing Mahrez calmly volleyed home a dinked cross from Ilkay Gundogan but the flag of assistant Ian Hussin denied the former Leicester City winger his goal.

Albion broke forward again on 20 minutes. After Fraser thought he should have had a free kick possession was quickly won back and Boyce was sent away down the right teeing up a chance for Jamie Allen, the midfielder lifting his first time effort well over the bar.

Jesus was next to have a chance for City, the Brazilian striker drifting out to the left to find space before cutting back inside, across John Brayford before pushing his low shot wide of the far post.

JESUS did find the back of the net on the half hour mark. Leroy Sane was denied by Collins at the near post but the ball looped up off the Albion keeper and the Brazilian was quickest to react and head home from inside the six yard box.

And the striker had a second four minutes later as Gundogan chipped a ball over the top for Silva, the Spaniard showing a deft touch to immediately lay the ball across goal for JESUS to take a touch and score off the inside of the post. It took a couple of minutes to confirm the goal though as referee Mike Dean had to check that Silva was not offside in the build-up.

Albion's luck failed to hold again before they could even draw breath from the restart. Sane laid the ball into the path of ZINCHENKO who from fully 25 yards looped a first time shot over the head of Collins and into the far corner. Whether he meant it or whether it was a cross, who knows. Whichever, it was unerringly accurate into the top corner.

Mahrez was denied once more on 42 minutes when Sane raced away down the left and delivered to the back post, the Algerian getting a right foot shot on target under pressure from Reece Hutchinson with Collins doing the necessary to push the ball over the bar.

City started the second half at a slightly calmer pace although their precise, slick passing was still stretching Albion from side to side as MAhrez and Sane both tried to pikc their way through and set up a chance. It was all going well until Gundogan tried a lofted pass into the channel that nobody in blue had read and the pressure passed.

Albion were then able to counter and Akins' pass into Fraser allowed the Scot to turn and curl a shot just over the top of Aro Muric's goal.

The fifth City goal came on 57 minutes and was the result of more patient passing. Mahrez worked a give and go on the right hand side with Silva allowing the winger to hang up as teasing cross for JESUS to leap high and herad confidently home to complete his hat-trick.

That signalled the end of the game for De Bruyne, continuing his return from injury and on in his place came the exciting English prospect Foden for the final 30 minutes or so. And the youngster had a goal on 62 minutes firing home the loose ball after Jesus had been denied by Collins and Jake Buxton on the edge of the six yard box.

Amazingly City failed to make it seven immediately afterwards when Sane again found space to exploit on the City left and pulled the ball back for Silva who somehow contrived to fire over.

JESUS then added a fourth of the evening on 65 minutes. Sane again did the damage on the left before impudently putting the ball between the legs of Brayford with the outside of his boot enabling the Brazilian to steer the ball home at the first time of asking beyond Collins.

Sane then made way for Bernardo Silva immediately switching wings with Mahrez meaning no respite for the Brewers defence and so it proved as Mahrez was allowed to cross right footed for WALKER to inflict an eighth goal on the Brewers defence.

By this stage Albion had made two substitutions of their own with Allen and Boyce making way for Ben Fox and David Templeton to get their own taste of the Etihad experience.

Walker then took his leave with just over a quarter of an hour to go with Brazilian full back Danilo given a run out in the closing stages.

Silva was then denied by an important deflection off Wallace then carried it onto the outside of the post although Collins appeared to have his angles covered had it been on target.

Joe Sbarra got his chance to get some much needed minutes under his belt when he came on for the final eleven minutes in place of Fraser who had put a great shift in down the middle.

The ninth City goal came on 83 minutes as a result of Silva, Bernardo that is, switching to the right to find space and delivering low for MAHREZ, in the middle this time to finally find the finish, at the second attempt.

City maintained their pressure right until the very end, the sign of consumate professionals. Ultimately their superiod class shone through. Just the small matter of the second leg in a fortnight at the Pirelli. Another memorable night that should be too.

Away tickets can be purchased from the Etihad Stadium this evening from the South Stand Ticket Office. 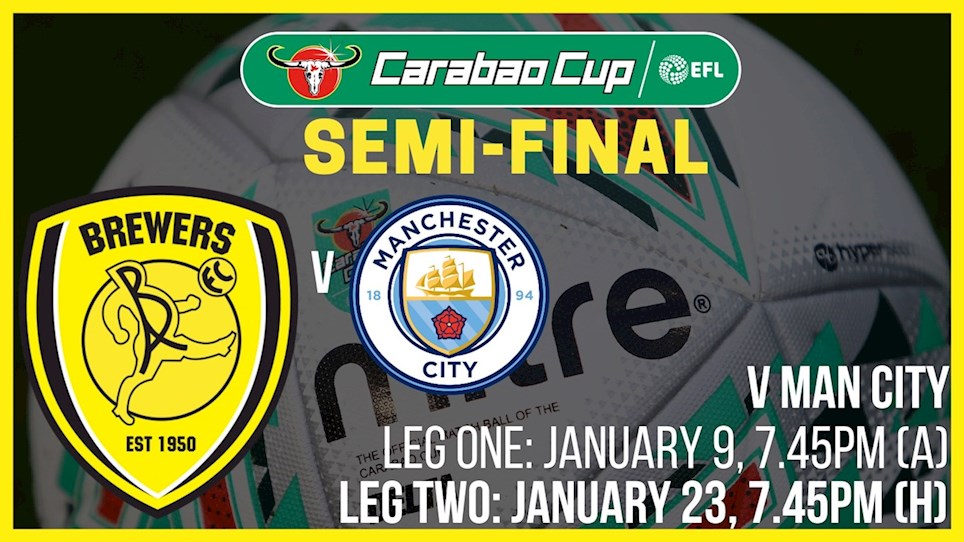 
BURTON Albion fans are being asked to collect their tickets for our away game at Manchester City today or tomorrow.


TICKETS for our Carabao Cup semi-final first leg AWAY at Manchester City are now on sale!