Boyce struck twice in the second half to secure back to back home wins for the Brewers after Scott Fraser's opener had been cancelled out by Morgan Ferrier's equaliser and Lucas Akins had found the bottom corner to restore Albion's lead five minutes after the break. Kieron Morris' goal four minutes after Boyce's first had the game on a knife edge at 3-2 but when the Irishman converted Colin Daniel's cross four minutes from time there was no way back for Rovers and Albion had their revenge for the late defeat at Prenton Park in September.

After Saturday's victory over Rochdale it was a matter of making just the one change to the winning team. With Stephen Quinn free after suspension it was a straight swap in the centre of midfield as Kieran Wallace was the unlucky man to make way.

Albion surged forwards from the off and had the Rovers defence stretched. They survived a big let off on five minutes when Scott Fraser was allowed to burst deep into the Tranmere penalty area cutting the ball back into the danger area where Sarkic was unlucky to see his effort blocked.

The bright started was capped off with an outstanding team goal on 12 minutes. FRASER started it off foraging to win possession from Kieron Morris in midfield and after excellent work from Sarkic and Boyce the ball was played through for Akins to break into the box and put the ball on a plate for Fraser to finish beyond Aaron Chapman.

Tranmere then started to play some nice football with Aston Villa loanee Rushian Hepburn-Murphy looking very lively and after feeding Neil Danns inside the box the experienced midfielder could only guide his low shot wide of the post.

Albion then spurned a good chance to make it two when Akins rescued a deep free kick at the back post and Sarkic headed over although the young forward probably felt the presence of his skipper, Jake Buxton, right behind him looking to bury a header into the net as well.

For all their great play in the opening quarter of the game Albion found themselves pegged back on 26 minutes. Hepburn-Murphy once again delivered into the box and Danns saw his header strike the post before falling perfectly for FERRIER to lash in the rebound.

The Brewers quickly found their attacking flow again and Boyce was denied by a smart stop from Chapman before referee Ollie Yates controversially denied Albion a penalty when David Perkins caught Quinn in the box with the match official neither awarding a spot kick or booking the Burton man.

Quinn did get a yellow card a minute later for a foul on Hepburn-Murphy before Albion squandered another excellent chance. Boyce led a break out from deep before supplying Akins on his left. The ball was switched to the right but Sarkic could not keep his effort down with Chaman watching it go over his crossbar.

Boyce was quickly sniffing out a goal when the second period got under way, an angled drive dipping andf bouncing awkwardly for Chapman who just managed to get enough of a touch on the ball to divert it wide of the post.

Albion were back in front though on 50 minutes when AKINS picked up possession and danced his way past a couple of challenges before firing low into the bottom corner through a crowd of players leaving Chapman unsighted.

Buxton went close to adding a third, heading onto the roof of the net when Chapman failed to clear a Quinn cross effectively enough and Boyce was close again with a header that was just sneaking under the crossbar until Chapman turned it over.

Albion's leading scorer did not have long to wait for his goal though. On the hour he calmly volleyed home from Fraser's delivery on the touchline.

The two goal lead lasted just four minutes as MORRIS fired in from the edge of the box with referee Yates surrounded by players pointing out that Colin Daniel was down with what appeared to be a head injury at the time.

Sarkic went in search of a fourth for the Brewers on 70 minutes but Chapman showed good hands to smother his low drive after cutting inside from the right flank.

It was end to end stuff in the last ten minutes after after a swift break Morris tried to beat O'Hara at his near post again but this time the Brewers keeper had his angles covered and was able to turn the ball away to safety.

Albion restored their two goal advantage when BOYCE showed all his predatory instincts to get across his man at the near post to finish off Daniel's low cross and that was the points wrapped up.

BOTH Burton Albion and Tranmere Rovers fans will be able to pay in cash at the turnstiles for our Boxing Day tie, kick-off 3pm.

Please note that prices increase by £2 each on match-day, so anyone wishing to attend can save by purchasing their tickets in advance.

To buy your tickets in person before match-day, please visit the club shop before it closes at 3pm tomorrow (Christmas Eve). The club shop will remain closed until 9am on Boxing Day.

You will still be able to buy your tickets online at the lower advanced rate until 5pm on Christmas Day, after which the prices will go up to their match-day rate. Please visit www.burtonalbionfc.co.uk/tickets. 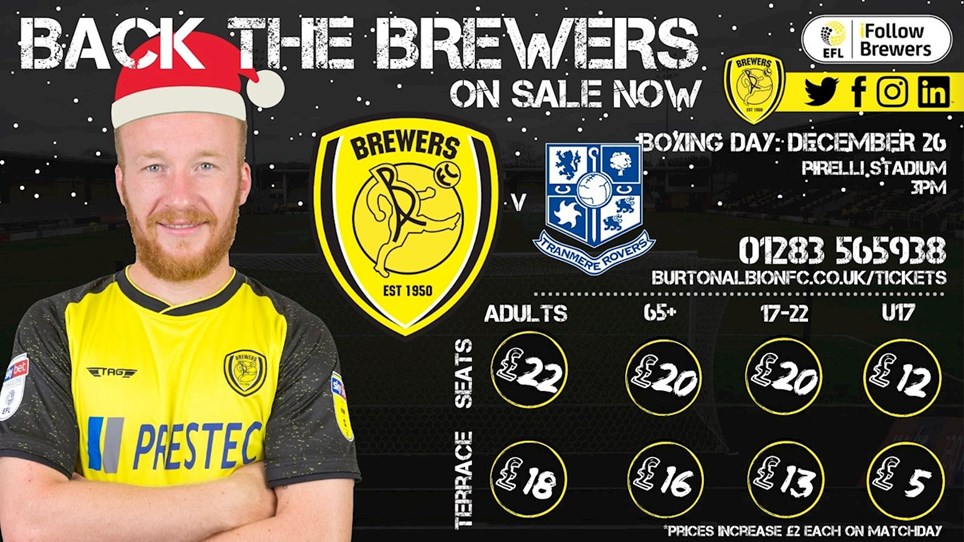 
TICKETS for our Boxing Day Sky Bet League One game at home to Tranmere are now on sale.