BURTON Albion take on Sunderland at the Stadium of Light on Tuesday evening (7.45pm kick-off) in our rearranged game - check out our match preview below!

THE Brewers and Sunderland have met on four occasions in league action, all over the last two campaigns in the Championship and League One.

Our most recent trip to the Stadium of Light saw an early Tom Flanagan own goal cancelled out by a Jack Baldwin header in a 1-1 draw - the first tie between the two clubs in the league.

Prior to that, goals from Darren Bent and Liam Boyce gave us a dramatic 2-1 win at the Stadium of Light in April 2018, while we have won one and lost one to the Black Cats at the Pirelli Stadium.

The Brewers have four main injury doubts for the game, with three players coming off injured in the 1-0 defeat away at Peterborough United last weekend.

Nathan Broadhead (hamstring), David Templeton (back) and Oliver Sarkic (calf) had to come off during the game, while John Brayford (calf) is also doubtful.

"John Brayford is a doubt but we've got several, including the three who came off injured," said Clough.

"David Templeton got a hit and it's his back. Richard Nartey seems to have come through okay, while Stephen Quinn took a couple of whacks as well and he's the only other one."

Defender Jordan Willis has been passed fit to face the Brewers, having been substituted in the Black Cats' 1-1 draw with Coventry City at the weekend with the fear being that he had aggravated a knee injury.

On-loan Reading striker Marc McNulty will miss out as he recovers from a hamstring injury, while Charlie Wyke and Lynden Gooch are ruled out with ankle injuries.

Midfielder George Dobson will be suspended after picking up five yellow cards, but Conor McLaughlin will return from his own one-game suspension.

Robert Lewis will be the man in the middle for the game at the Stadium of Light. The Shrewsbury official took charge of the Brewers twice last season in EFL Trophy games against Port Vale and Walsall, and has shown 51 yellow cards and three red in his 13 games so far this season.

The assistants will be Simon Clayton and Christopher Ward, with Mark Dwyer as the fourth official.

Tickets go off-sale at the Pirelli Stadium at 11am on the morning of the game. 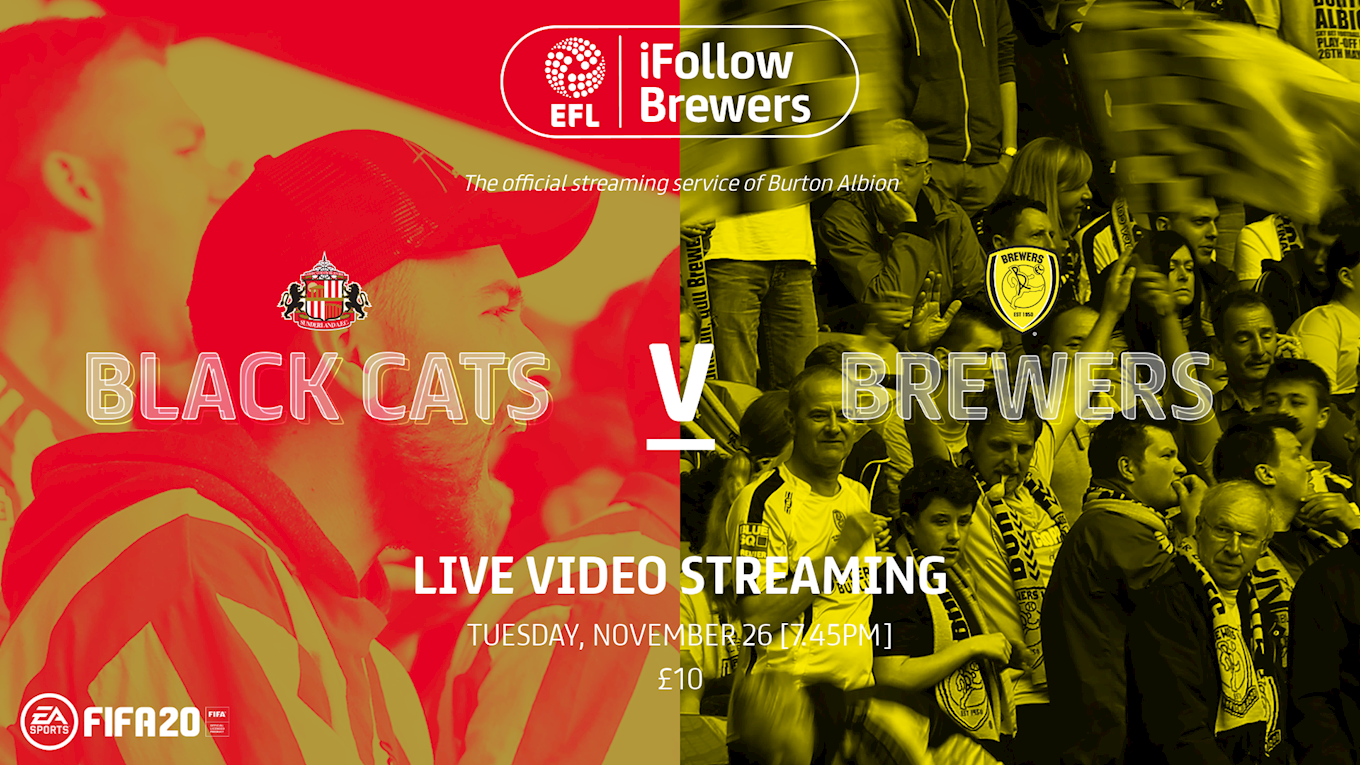 Tonight's game IS being streamed on iFollow Brewers with Match Passes available for just £10! It's simple enough to buy a Match Pass - simply click here - then click on "Buy A Video Match Pass". This will take you to log in to your account, and then into your payment details. Easy!