DAVE Redfern, one of Burton Albion’s 1987 Wembley heroes, has passed away at the age of 60.

Redfern returned to the club in the 1986/7 season, recruited by manager Brian Fidler to partner hot shot Bob Gauden in attack. In those semi-professional days, Redfern had to juggle football with his work as a Derby police officer, but that didn’t stop him playing 50 times for the Brewers in that epic season.

Fidler’s team made remarkable progress in four cup competitions, reaching the NPL Challenge Cup Final at Maine Road, the Birmingham Senior Cup Final and the semi-finals of the GMAC Cup, but it was the FA Trophy that truly excited Brewers fans with its final at the Mecca of English football  - the old Wembley Stadium.

lbion, in the second tier of non-league, were not expected to get to the final but defied the odds and higher opposition to book a date with the twin towers against Kidderminster Harriers.

Redfern was a key part of that team and that memorable season.

A hard-working, but not prolific striker, he jokingly claimed to be “the best non-scoring forward in non-league football” and in Rex Page’s book Wellington Street to Wembley he said he told striker partner Gauden, 'You get the goals and I’ll  do the work'.

He certainly did that, as well as holding the ball up and allowing Gauden and Albion’s potent midfield to take the glory. He was a key part in a successful side and a modest player willing to do the donkey work for the good of the team

But he also did score important goals, including two in that epic FA Trophy run – the goal that clinched victory at Conference side Northwich Victoria in Albion’s opening match and most memorably, the solitary goal in the quarter final replay at Eton Park when the Brewers upset favourites Maidstone. 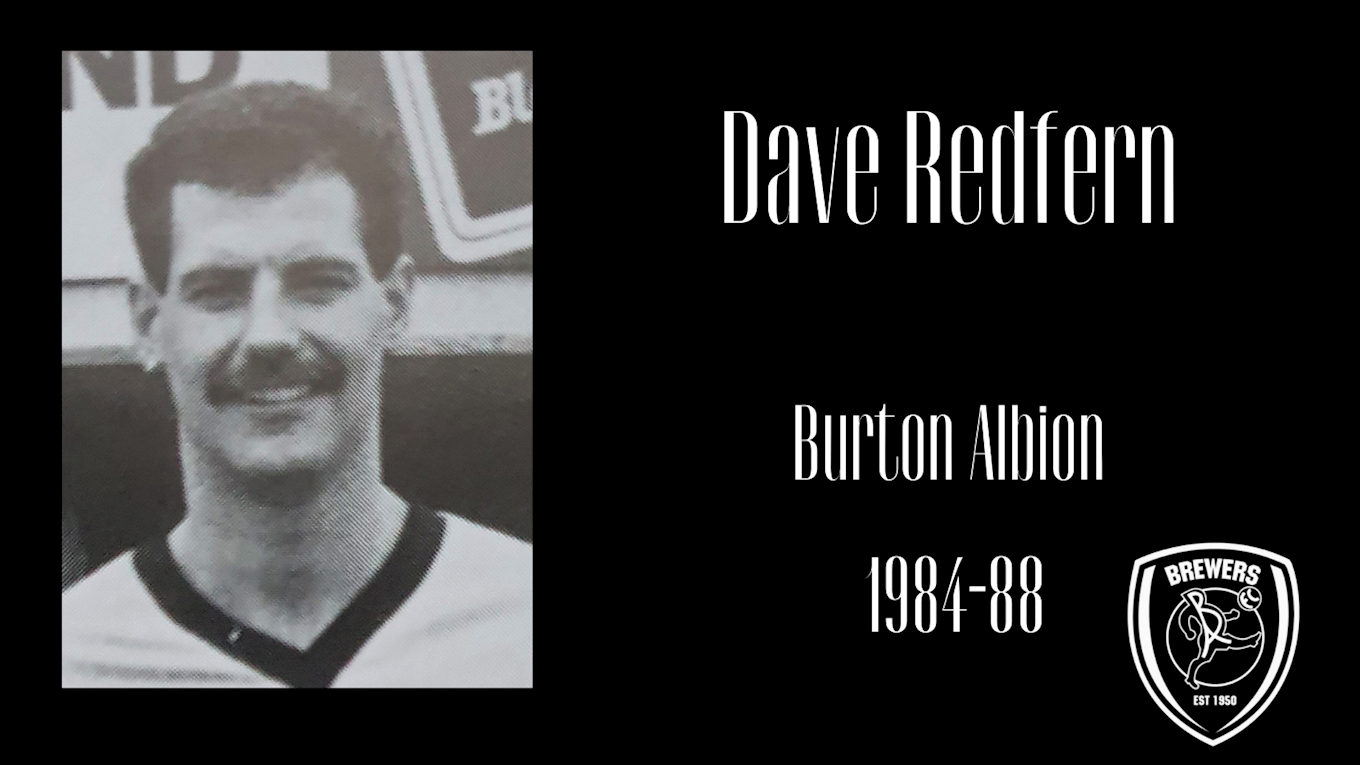 Albion enjoyed their day out at Wembley, earning a draw and a replay that broke hearts at the Hawthorns but nothing could take away from the joy of fans and players at having played at the old Wembley for the only time in the club’s history.

An open top bus parade was just reward and Redfern even got to sing on the Brewers official Wembley song.

Redfern, whose younger brother Simon is fondly remembered for his time as a Brewer, notched up 68 appearances in total for the club over the course of three seasons in the 1980s.

He has more recently been living in Italy and passed way over there.

Burton Albion Chairman Ben Robinson said: “Everyone at Burton Albion is saddened to learn of the passing away of one of our 1987 Wembley team. That was one of the most memorable times in the club’s non-league days and Dave was a key player whose cup exploits are still talked about to this day.

“Our thoughts are with all his family and friends at this sad time.”

In the picture of the Wembley team Dave Redfern is second from the right in the back row.