BURTON Albion made it three games unbeaten in FAWNL Division One Midlands as the Brewers drew 2-2 with newly-promoted Peterborough United.

Having picked up their first three points of the season in midweek against Long Eaton, the Brewers had to settle for a point in an entertaining affair on Sunday afternoon.

A cool penalty from Amber-Leigh Denny midway through the first half had cancelled out Charlotte Jarvis’ unfortunate own goal.

Then, after a host of missed opportunities, Burton looked to have won it late on when Millie Wortley stunned the visitors with a fantastic 40-yard chip. However, Posh managed to find a response, with Jess Driscoll poking home with just a couple of minutes left to earn her side a point.

The game started very openly, with Hanaiya Azhar causing major problems in behind the Posh defence with her electric pace, but it would be the visitors who had the first major chance.

Driscoll showed brilliant skill down the left-hand side to evade two challenges before feeding her striker. Keir Watkins turned quickly and laid the ball into the path of Beatriz Borque, who could only watch despairingly as her effort rebounded off the post with Alice Langstone rooted to the spot.

With this scare negotiated, Burton continued to threaten, mainly through Azhar. The winger came close to breaking the deadlock when Wortley shifted the ball to her from the left side. Azhar quickly got the ball onto her right foot, but had her shot blocked well by Stacey McConville.

In the 29th minute, however, Posh hit the front. A free kick from the left-hand side was swung onto the penalty spot, and despite Jarvis managing to make first contact, her flicked header went into her own net - nestling in the bottom corner.

Peterborough’s lead would be short-lived though, as Albion were awarded a penalty just four minutes later. Following a throw-in into the box, the referee pointed to the spot after adjudging that Cassie Steward had handled in her effort to intercept the initial throw.

The Brewers’ captain, Denny stepped up and confidently placed her spot-kick into the bottom-left corner, leaving Katie Cooper stranded in the middle of her goal.

Following the interval, Burton started slowly, and Driscoll nearly profited as she struck a fierce effort into the side-netting following good hold-up play by Watkins.

Both sides sensed a winner, and both were pushing, and when Ella Ritchie burst through on goal, only one result looked likely - but the striker dragged her shot wide.

Seconds later, Posh missed a chance of their own. Ellen Marson had time and space from close range after the ball had fortunately fallen at her feet, but she could only shoot straight at Langstone.

Yet, in the 82nd minute, a moment of magic turned the game completely on its head. With Cooper off her line, Wortley looked up and sent a magnificent 40 yard chip over the keeper’s head to give the Brewers the lead.

As the hosts had done to Posh in the first half, Peterborough now returned the favour as they equalised just minutes later. Another free kick was the source, as the Brewers failed to deal with the initial delivery, allowing the ball to fall at the feet of Driscoll who had the simple task of tapping home.

Despite the sucker punch, Burton will be pleased with their start to the season as they have picked up five points from their opening four games - beating their total from the entirety of their previous campaign. 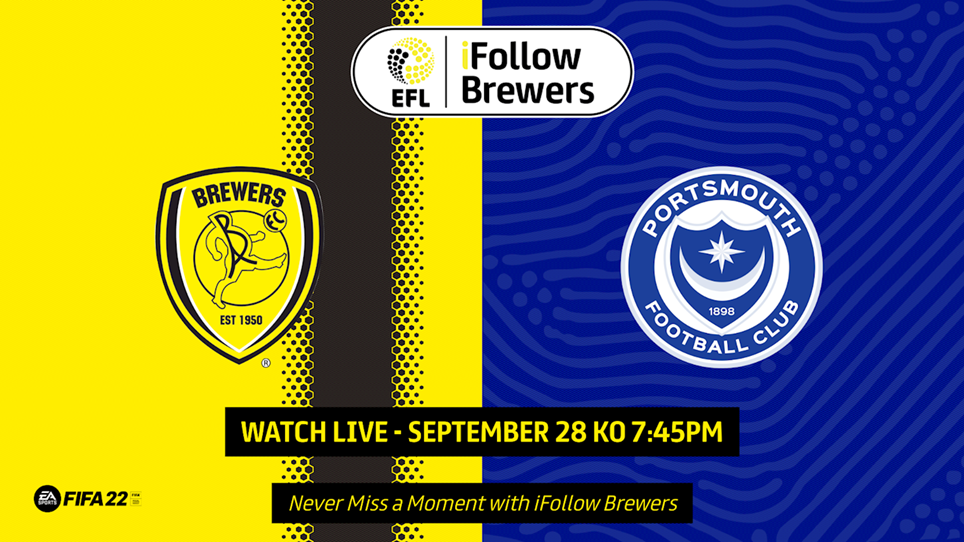 
IF you can't make it to the Pirelli Stadium tonight, then you don't have to miss out on the match action.


JIMMY Floyd Hasselbaink says he expects a different challenge from Portsmouth to that of last season when they visit the Pirelli Stadium tomorrow night (7.45pm kick-off).


BURTON Albion fell to a second consecutive FAWNL Division One Midlands defeat on Sunday as they were comprehensively beaten by a well-drilled Leek Town side.


DEJI Oshilaja says Burton Albion will continue to work hard following last weekend's defeat and ahead of tomorrow's game at home to Portsmouth.