BURTON Albion return to home action this weekend with the visit of Cambridge United to the Pirelli Stadium tomorrow afternoon (3pm kick-off).

The Brewers got off to a good start to the new year going unbeaten in the first four games of 2022.  Despite the good start to the year, Albion have lost the last two matches and will be looking to get back to winning ways tomorrow.

Like Burton, Cambridge also had a great start to the new year, winning five of their first six games including a shock 1-0 FA cup victory over Newcastle at St. James’ Park.  However, without a win in their last five in all competitions, the U’s will look to rediscover their early January form.

The two sides have only ever faced off a four times since Albion were promoted to the EFL - though of course the two sides famously met in our Conference days, battling for promotion against each other in 2009.

Since then, Cambridge edge the head-to-head record with three victories to the Brewers' one. Our victory came in the Brewers historic 2014/15 season - a famous away day which saw the club crowned Sky Bet League Two champions.

Stuart Beavon opened the scoring for the Brewers before goals from Tom Elliott and Robbie Simpson either side of half-time saw Albion trail 2-1. Phil Edwards' infamous thunderbolt got Burton level, before a late Kevin Stewart goal ensured a 3-2 win over Cambridge at the Abbey Stadium.

Sam Hughes (illness) and John Brayford (hamstring) are on course to return to the squad for tomorrow’s game. Jonny Smith remains out with a tear in his calf and will miss the next two matches, while Deji Oshilaja remains sidelined with a hamstring injury.

Cambridge defender Jack Iredale could miss tomorrow’s game due to injury. Top scorer Joe Ironside could also miss out again through injury after missing the late loss against Gillingham.

The referee for tomorrow’s tie will be Marc Edwards, who will be assisted by Grant Taylor and Steven Plane. The Fourth Official for tomorrow will be Conor Brown.

Edwards has shown 60 yellow cards and one red in 18 games so far this season.

Make sure to get your ticket in advance for tomorrow’s match before midnight to save money. There will be an additional charge of £2.00 for anybody who purchases tickets on the gate tomorrow.

Families can start their matchday experience 90 minutes before kick-off, with activities on the 3G pitch next to the BACT building. Brewers midfielder Jonny Smith will be joined by Goalkeeper Callum Hawkins over at the Family Zone, so make sure you come along and say hello!

The Family Zone will feature music, lots of games and activities, teas and coffees. Visitors will be encouraged to grab an ‘honesty flag’ to use during the game to cheer on Jimmy Floyd Hasselbaink’s team which we ask you to return after the match.

There are also lots of fun activities to do in the family section of our website – and we are encouraging all young Brewers to write a letter to Billy and Bettie ahead of tomorrow! Click the link below to be taken to the page and get your letter to send! 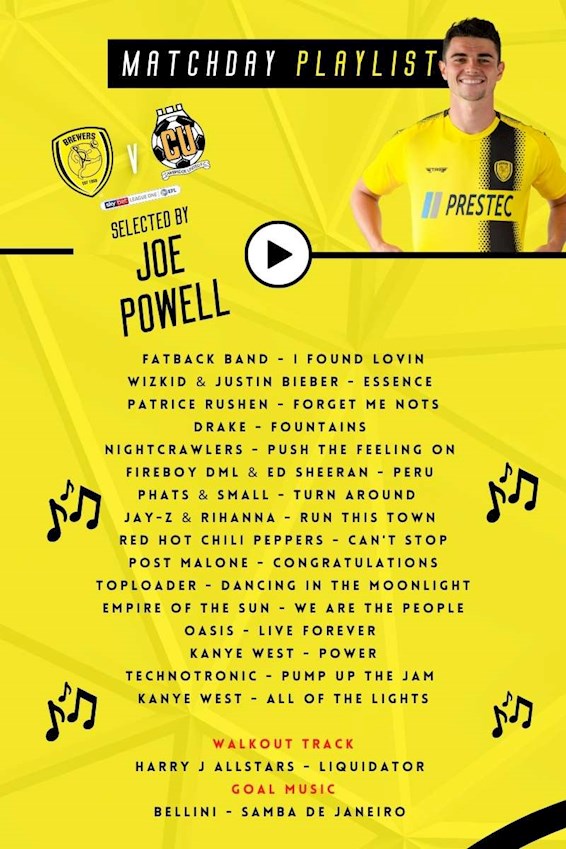 Burton Albion fans are being asked to support a bucket collection in aid of St Giles Hospice at Saturday’s home game with Cambridge.

Volunteers will be at the turnstiles ahead of the game ready to accept donations.

St Giles Hospice provides palliative and end of life care to people living with terminal illness, in Burton and the surrounding areas, in their homes or at the hospice.

St Giles cares for over 7,500 people every year, including the loved ones and families of patients through bereavement support.

The Pirelli Stadium will be offering jacket potatoes as a healthier food option from our refreshment kiosks for this weekend's game against Sheffield Wednesday.

As part of our aim to implement feedback from supporters at recent fan forums, particularly around healthier options at our refreshment kiosks, fans will be able to buy jacket potatoes this weekend, on a trial basis, alongside our usual options.

This game is not available to live stream for fans based domestically, but you can buy an audio-only Match pass for £2.50 BY CLICKING HERE. Fans based internationally can live-stream as normal.

Britvic is a producer of soft drinks based in Hemel Hempstead. The company originates from the mid 19th century. Formally known as the British Vitamin Company, it changed its name to Britvic in 1971.

The company has, over the years, developed a strong portfolio of its own iconic brands, including Robinsons, Tango, J2O, Drench, Ballygowan, and Fruit Shoots.

As part of the UK’s largest steel stockholder (Barrett Steel Limited), A H Allen can offer nationwide steel and safety product supply in a matter of days, thanks to the business's 30 strategically placed depots across the UK.

Not only does Barrett Steel Limited hold more than 120,000 tonnes of steel in the UK but it also continuously invests in the latest steel processing technologies. Its breadth of processing services is currently unmatched in the stockholding sector.

Quality service and supply is at the heart the business, with it holding ISO 14001, ISO 9001, BES 6001 for sustainable sourcing and NHSS3B for the supply of materials into the National Highways Sector. AH Allen Steelstock, from its Swadlincote hub, can utilise all these services for each of its customers whilst also offering an unparalleled turn around on cut-to-size material owing to the seven band saws situated on site. The business has been in partnership with Burton Albion for a decade and today is represented by Managing Director Jaz Johal and his team. After an extremely difficult 24 months, AH Allen Steelstock would like to welcome their customers and guests to the Pirelli Stadium.